In the "Spotlight" with Donna

Meet the fabulous and amazing Donna from Florida! 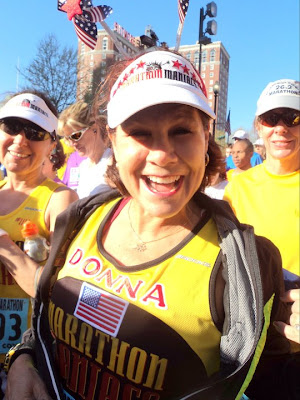 RETIRED POSTMASTER'S AWESOME "FEAT"
Runs Marathons in all 50 states
On Sunday, May 1, 2011, Retired Florida Postmaster Donna Loud achieved a truly amazing feat. She completed the Cox Sports Marathon in Providence, Rhode Island after having run marathons in all the other 49 states in our nation. This is an accomplishment few people can claim (most of us can't even claim running one!). The road to the Rhode Island marathon was a long and winding one, but this retired Postmaster has a "can do" attitude that got her through every bend and break along the way.
It all began when, at the age of 49, Donna realized that she needed to change some of her bad habits, lose some weight, and get active to increase her longevity. She had never run before, and admitted she was one of those people who made up all kinds of excuses to get out of phys ed class in school. She read an article about the Galloway training method for running marathons and contacted the coach in Sarasota, Florida for information. She had no desire to run a marathon, but joined the group and started training just to get active. Her goal was to improve her health and reshape her body. Little did she realize at the time that she would become inspired by her coach, Mary Lenari, and got caught up in the camaraderie and team spirit. 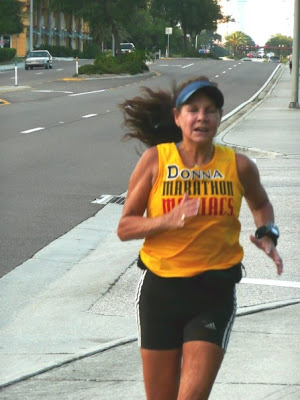 After much prompting from her coach and running group, she decided to sign up for the Disney half marathon in 2003. Unfortunately, the half marathon was full so she signed up for the full marathon, still intending to run only half of it. Disney had a cut-off time of 7 hours and Donna was not sure she would be able to complete it in time. With encouragement from her friend and running partner, Michelle Ieradi, they actually finished the full marathon in 6 hours, 59 minutes and 15 seconds. Talk about cutting it close! Despite the feeling of euphoria and accomplishment she felt at the finish line, she had no intention of ever running another marathon ever again! Her son-in-law, a dedicated couch potato at the time, was truly inspired by her story and asked her to help him train to run the Disney marathon the following year. As is her nature, she found she couldn't say no, so after a few months of rest they began training together. In 2004 she completed the Disney marathon once again along with her daughter and son-in-law, in 5 hours, 51 minutes and 48 seconds!
Again she decided she was done running marathons but her daughter wanted to run in the Marine Corps Marathon that fall. Donna loves Washington, DC and thought about how it would be such an incredible experience to run by all the historic buildings, so she agreed to run. The start and finish line in Arlington National Cemetery was especially moving. That is when she really got hooked on marathoning. She heard about the 50 Staters Club (runners who run a marathon in each of the 50 states) and decided that would be a great way to travel and see the USA. Knowing how difficult that would be to accomplish while working for the Postal Service, Donna decided to retire in January, 2005 to concentrate on running. She completed nine marathons that year and joined the 50 Staters Club. At these marathons she frequently saw the same people and many of them were Marathon Maniacs. Guess what, she joined that club as well, and Donna is Marathon Maniac #990. Last year she decided to see how many Maniac "stars" she could earn. A "Loud" proud accomplishment was running marathons in 30 different states within 365 days to obtain their highest level of achievement. Donna is now a "TEN STAR MANIAC"! 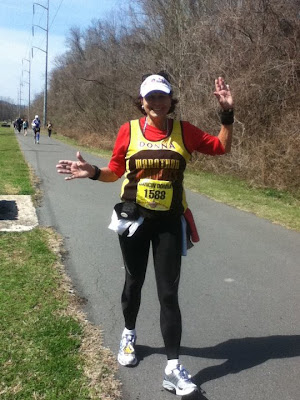 Donna is now 58 years old and has completed 71 marathons. She has made so many new friends and seen so many beautiful places in all 50 states of our exquisite country. She is fortunate, through her involvement with NAPUS, to have been able to spend time with many Postmasters during her travels. Several have taken her touring around their part of the country, invited her to share a meal in a restaurant and in their homes, and even to spend a night or even an entire week.
So, how does one actually train to run marathons? Training takes a lot of dedication in order to be successful in completing these 26.2 mile runs. Donna told me she is constantly "in training". She usually runs two maintenance runs of 3-5 miles during the week and a long run on the weekend. Last year the long run was almost always a marathon (remember she ran 30). This year she feels like a slacker since she is "only" running 8-10 miles on the weekend when she doesn't have a marathon or half marathon scheduled. She is either a little bit crazy or quite remarkable. Either way, she is my new hero. And no, I do not want to be just like her, but I will admire her from afar.
By now I'm sure you are wondering what kind of results she achieved in marathoning. Donna said her fastest finish was a "slow" 4 hours 50 minutes. And because she was running so many, she has since slowed her pace and has become fairly consistent with an average time of 5 hours 30 minutes. She finished the Rhode Island marathon in 5 hours 25 minutes. Way to go, Donna. Now that she has completed her quest of running in all 50 states, Donna wants to give her body more rest. She will continue to run a few marathons each year and looks forward to running several of them again, including the New York and Chicago marathons. While running the big city marathons are exciting, she really likes the "home town" feel of the smaller races.

Donna retired from the Postal Service after working for 32 years. Twenty-six of those years she served as a Postmaster and retired from Osprey, Florida, a level 18 office. She has been an active and dedicated member of NAPU since she first joined. She has served the Florida Chapter as President, Vice President, PAC Chair, and Convention Chair as well as other assignments through the years. Donna was also elected to serve on the National Executive Board as a National Vice President. These days you will find Donna at the NAPUS national events serving as Aide (for a second time) to our National Secretary/Treasurer, Ruthie Cauble. Be sure to congratulate her on her accomplishments when you see her in Puerto Rico; that is, of course, if you can keep up with her.
-Donna-
Posted by Walking Diva at 10:44 AM

Labels: In the "Spotlight" with Donna