In the "Spotlight" with Julie

Meet the beautiful and fabulous Julie from Santa Monica California! 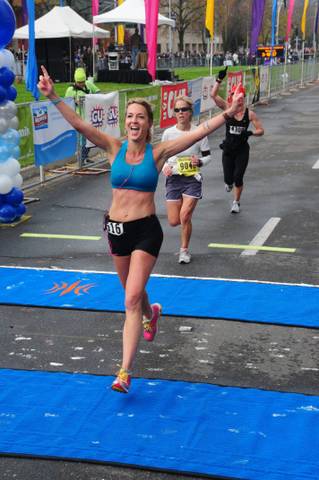 Hi I am Julie. Running is my passion, my life and my love. I started running at age 37, before that I was overweight on antidepressants and I could barely run around the block. I needed to do something wonderful. I knew I had greatness within me so I decided to train with a friend for the 2007 Los Angeles triathlon and the rest is history.
The marathon was intriguing to me. It was while I was training with a running group that I found out about the Boston Marathon. So I ran my first marathon, the LA Marathon in 2008. I was about one hour short of qualifying for Boston, but again I knew deep down that I could do this. Between March of 2008 and December of 2010 I had run 18 marathons. Maybe I was having a mid life crisis, and if so, what a great way to deal with it. Some people drink, some go shopping and I decided to run a bunch of marathons and am having the time of my life. On my 19th attempt I qualified for Boston. I never, ever gave up. I even made it into Runners World. I knew that if you make a choice to follow your dreams and give it all you've got, anything is possible. 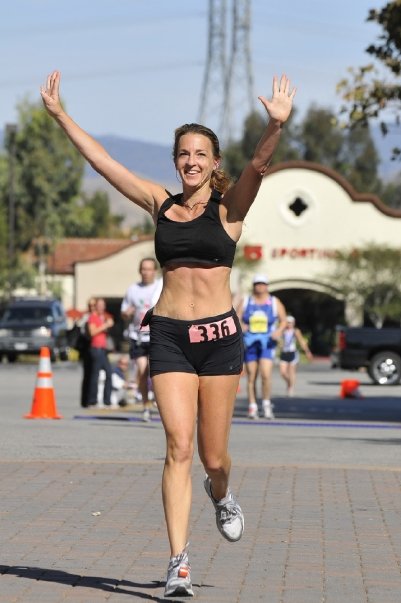 My victory was bitter sweet. My father was my greatest fan and most challenging critic. He was diagnosed with pancreatic cancer in October of 2010 and I lost him only a month later. Our greatest dream was that he would see me qualify for the Boston Marathon where we would go together for him to cheer me on.
This picture represents a runner's moment of ecstasy and deep sorrow. I ran this marathon for him. I finished with a time of 3:47. My fingers are pointing to him in Heaven and my rapture is for us both. He was not here in person to see me run Boston this past April, but I know he was watching. I think you can see the joy and gratitude I feel for him in my face.
I am now a pace leader with the LA Road Runners. My commitment is to inspire other runners, or even those who just dream to get off the couch and run around the block. When I run, my spirit shines, and sharing that light with the world is a joy that words can not even describe.
Starting in April of 2012, I will be going on a journey to run 52 marathons in 52 weeks in honor of my father to benefit The Pancreatic Cancer Action Network and all those who aspire to have a healthier, happier life style.

I feel so blessed to have the opportunity to show people that with a firm belief, a deep desire and with hard work and determination that doors will open up for you that you didn't even know existed. Just follow your heart, believe in yourself, and let the miracles happen.
-Julie-
Posted by Walking Diva at 4:13 PM

Labels: In the "Spotlight" with Julie