In the "Spotlight" with Tony Endorphin Dude 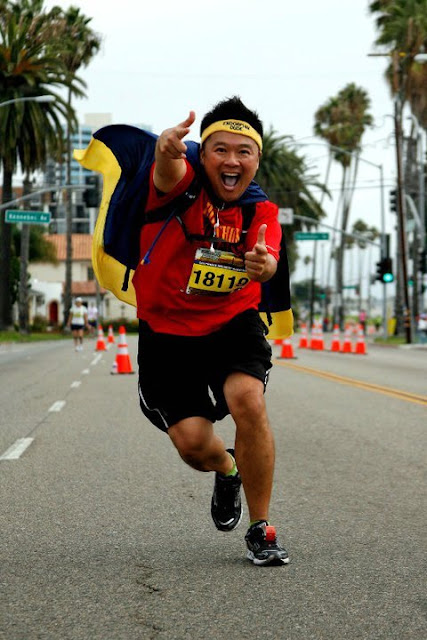 About three years ago, I tipped the scale at 223 pounds. I had high blood pressure, high cholesterol, and I took meds for adult onset diabetes. A typical day in the life of unhealthy Tony  consisted of over-eating and no physical activity.  I sit in a cube in front of the computer all day, so consumption of large quantities of food was my norm.  The only exercise I got in the office was my hourly walk to the vending machine.  (Ok, who am I kidding, it was more like every 15 minutes!) After work, Jabba The Hutt would take over my body and the sloth in me would lounge on the couch until past midnight.  With only junk food in my system and no exercise, I found myself clocking in only four hours of sleep every night.  By the time 6am would roll around, I would struggle to get out of bed. My daily routine proved to be a dangerous equation: gluttony + immobility = early expiration date.

On April Fool’s Day I thought I was having a heart attack. No joke. I felt numbness on the left side of my body and a sharp pain in my chest.  My dog Chewbacca barked and ran around in circles as if she sensed she was soon going to be an orphan.  I got up from the couch, leashed up the dog and went for a walk.  The cool breeze made a world of difference. When I returned, Chewbacca snuggled up with me and gave me that don’t-ever-do-that-again stare in her eyes.  This was the turning point.  I knew I had to make some changes in my life. That short walk eventually turned into multi-mile urban hikes with the dog. I then started to jog, and before I knew it, I was running. A year later, I dropped a huge chunk of weight, was weaned off all meds, and ran! 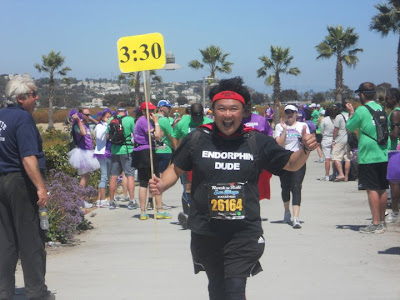 On July 25, 2010, I ran my first full marathon in San Francisco. When I crossed that finish line, I saw all the blood, sweat, tears, and GU flash before my eyes. What an incredibly surreal moment, one that felt like a euphoric out of body experience. I had never ever felt runner's high to that degree. I knew that day that I would replay that moment in my head, over and over again, for the rest of my life. I was on that runner’s high for days, and I admit, I wore that medal around my neck when I took Chewbacca for her walk. My legs, knees, and thighs may have been completely banged up, but my heart kept yearning for more. Two short months later, I became a Marathon Maniac.

The San Francisco Marathon was supposed to have been my one and done bucket list race, but being out there on the marathon course makes me feel like a super hero. I am Endorphin Dude!  Who would have thought that the guy who had a heart attack scare would become the Marathon Caped Crusader?  I am definitely experiencing a cardiac infarction of the euphoric kind these days. 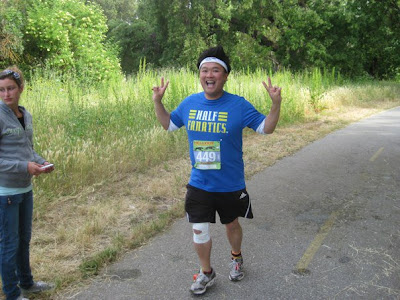 Since October 2009, I have run 27 ultra/marathons and 39 half marathons. Every time I cross that finish line, I think about how my dog saved me.  Chewbacca is a rescue dog with a pretty troubled past.  She was a pregnant stray when the Peninsula Humane Society found her.  There was probably some abuse that went on as well.  Thankfully, the kind folks at PHS took very good care of her.  I knew right away that she was the one for me and it didn't take long before I adopted her. People tell me all the time that I did a good thing by rescuing this dog, but the reality is that she rescued me.

I am Endorphin Dude, and I will be running 52 marathons this year for all of Chewbacca's homeless four legged friends.  All proceeds of my fundraising will go to the Peninsula Humane Society, the folks who helped me find my side kick. This dog has changed my life for the better, and it is my hope that her furry friends at the Peninsula Humane Society will do the same for another. 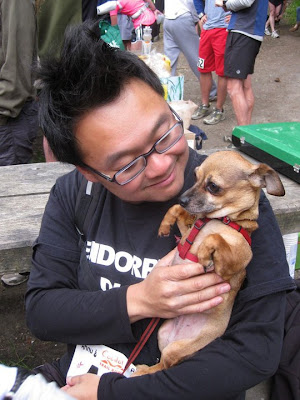 You can read all about my journey at Endorphin.Dude.com.  If you would like to make a donation, you can do so here:

Thanks again and I'll see you at the finish line!
-Tony "Endorphin Dude-
Posted by Walking Diva at 3:04 PM

Labels: In the "Spotlight with Tony