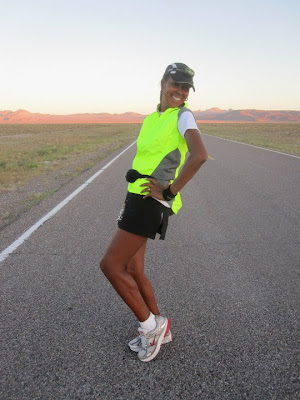 My journey continues...You met the two ladies (Felma & Debora) that I'm training for their first half marathon at Disney Half Marathon in September. We now have a third person joining us. Debora's husband Greg. Debora has convinced Greg to join us and I think there's a little competition between them. Today we finished up our third week and the ladies are doing good, still excited and motivated to power walk their first half marathon.
Last week I faced my biggest fear. Public speaking! I spoke at the Circle City Rotary Club in Corona. I spoke about my journey to Guinness and once the butterflies went away I really enjoyed myself. Becoming a motivational speaker is something I would like to do. I do have 106 things to talk about.
Each week I'm going to take a person(s) and put them in the spot light. This week it's Cindy from Oregon and I asked her what are your plans for 2011? 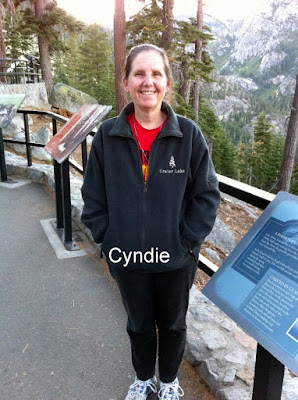 I am Marathon Maniac #90. I met the Main Maniacs at the Crater Lake marathon in 2004. I was there with my best running friend, Cathy Troisi, Maniac #37, was featured in Yolanda's blog in September 2010 when she did the first Tahoe Double Dare (144.4 miles). As of today, I have run 129 marathons and 12 ultras in 14 years of running in races. I started walking and then running in 1994 for weight loss. I once weighed over 300 pounds.

Yolanda has now outed me because she asked me to share my marathon plans for 2011. My goal is to get at least one more Marathon Maniac star, but please don't tell anyone- I can't take the pressure. I have done three marathons this month. The first two were a double created in Seattle by emerging super race director, Steve Walters. He combined the "Second Chance" marathon with already super race director Adrian Call's "First Call to Run" marathon to make a fabulous New Year weekend. Then I went to the awesome Maui Oceanfront marathon, directed by the most awesome Les Wright. I am also headed to Les "Tahoe Triple" in September. Steve has also created a triple for Independence Day around the traditional Sauvie Island marathon, which serves strawberry shortcake post-race! In between all that, I will go to Yakima, where Lenore and Bob Dolphin (a marathoning legend) are the co-race directors. Yakima features a wonderful post-marathon potato bar dinner with plentiful awards. Then we have the Marathon Maniac reunion at the Fox Cities Marathon, which provides another double opportunity for Wisconsin lovers. All in all, it will be a great year. I look forward to seeing everyone out on the road!
-Cyndie-

Before you run, check to see if the bulldog has teeth.
-Les Brown-

Fear is a very natural and normal response to the challenges we face in life. Fear tells us there is something we must be cautious about. Fear puts us on alert and tells us there is something we must be prepared for. Fear means something we know nothing about is about to come upon us. Fear of change, the unknown, rejection, failure and success are like the barking of a ferocious bulldog. for people of color, the fear of being bitten, again, immobilizes us. A history that has not honored our sense of worth and value supports the fear. The best thing we can do to fear is confront it. We must know the validity of the things we fear. We must believe we can conquer them. The next time the bulldog of fear is upon you, stair it down, open its mouth and check to see if the thing has teeth.
-Iyanla Vanzant-


Felma is very creative and talented. Check out her doll house miniatures.
http://dollhouseminiaturesbyfelma.blogspot.com/

The Marathon Show
http://www.themarathonshow.com/
Posted by Walking Diva at 8:50 AM