In the "Spotlight" with Marissa 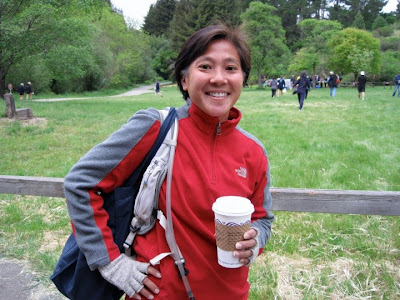 In the "spotlight" this week is Marissa from the San Francisco Bay Area. Marissa is pretty, petite, and the nicest person you will ever meet. Don't let this pretty lady fool you. Marissa is unbelievable! She's a Western States 100 miler finisher!!! 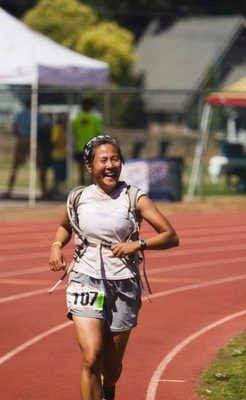 Why do I run?
Maybe it was because I got into it at such a young age. My parents join the running craze in the mid-70's, so I was fortunate to grow up with good role models in heath and fitness. I ran my first 10K when I was nine, so distance running wasn't a strange concept.
Why do I run?
Maybe it was because it was an easy way to stay fit. I never joined the cross-country or track & field times in high school or college. running for me was a way to relieve stress, to hang out with my mom, to have a good time...nothing more than that. It was a part of my lifestyle that I easily took for granted; I just had to throw on my shoes and head out the door. I ran until I was tired, then I went home.
Why do I run?
Maybe it was because I found out that I wasn't too bad at it. My parents starting running marathons when I was in my early 20's, and I attempted my first marathon in 1996. My time was 4:10 - not bad for the first time. My 2nd marathon finishing time was 3:52, and my 3rd was 3:39:49, fast enough to qualify for Boston.

Boston: what an experience! It was awe-inspiring to be surrounded by such an amazing caliber of athletes. My time was at the bottom of the qualifying times - these runners banged out sub-8 miles when doing an easy run! WOW. I got sucked into a high performance life style. Suddenly, running performance became the focus. Splits, training schedules, speedwork, tempos...all of that was the focus to improve my finishing times.

A better question is: what would I do if I couldn't run? That horrible question became real on October 25th, 2005. After running a hard half marathon in September, I felt an intense pain in my lower right shin. I found that if I took a couple of days off, the pain went away, but then came back when I started running again. But runners are tough, and a little pain shouldn't stop you. Until the pain was unbearable...Finally, I went to my doctor to see why my "soft tissue injury" wasn't healing. She sadly informed me it was a stress fracture, and my running days were ow on hold for at least 2 to 3 months.

Fast forward to February 2006. My cast was off, I finished and I was now free to start running again. I set my goals on the Skyline 50Km or the San Francisco Marathon. Both were about 6 months away, but I found that trail running was a new and different challenge. Instead of speedwork at the track, you could get your heart rate up running up hills. Instead of long flat bike paths, I discovered the amazing regional park right next to my house! 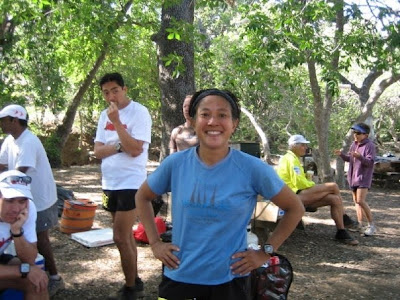 The Skyline 50Km was it - and boy, what an incredible experience! Suddenly, it wasn't about splits or times or finishing place. It was about the beauty surrounding me, the fabulous camaraderie of the trail running community, the sense of accomplishment in running an ultra. This, I discovered, is WHY I RUN.

Ultras are now my new challenge. I don't have to be fast, or worry about finishing times. When I'm running 50 miles, 100km, or 100 miles, the goal is TO FINISH. Between 2006 and 2008, I ran several 50K's, 50 milers, and one 100K. My first 100 miler was the Javelina Jundred in Arizona. Wow, that was fun! It was all about taking in the experience, and learning what does and doesn't work in a distance that long.

My second 100 miler was Western States in 2009, the HOT year. It was over 100 degrees on Saturday, and 105 degrees in Auburn when I finished on Sunday. There is such incredible beauty in the Sierra Foothills, and it was an honor to be a part of a historic race. I discovered so much about myself, and just how tenacity and perseverance can help you accomplish your goals. Frankly, I wouldn't have finished if it wasn't for my pacer, Heather Van Nes. She knew when to be a coach, a friend, a cheerleader, or a drill sergeant! And we both crossed the finish line in 29:38 (22 minutes to spare!).

I finished my 3rd 100 miler in November last year - Cactus Rose, outside of San Antonio, TX. It was a hard and rugged course, with only 45% of the entrants finishing. Again, my tenacity and perseverance (read: stubbornness and stupidity) came through: because all of the females behind me dropped out, I finished 3rd place female!

2011 will be a busy year for me. I finished the Coastal Trail Runs Golden Gate marathon in February, Way Too Cool 50k yesterday, and have Lake Sonoma 50 miler, Miwok 100km, and the San Diego 100 on the docket up to June. After that, I think I'll take a break. A short one. Since now I know why I run, I just can't stay away.
-Marissa- 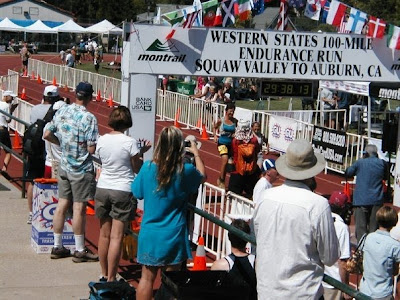 Labels: In the "Spotlight" with Marissa