In the "Spotlight" with Jerry 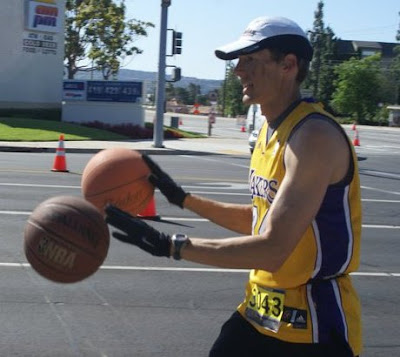 Five years ago I decided to run the Los Angeles Marathon. Not knowing what I was doing I ran for a few months with my longest run being a 14 miler. Needless to say the marathon didn't go so well. I got the first cramp of my life at mile 22 and had to limp the last 4.2 miles to the finish line. Not being satisfied with that performance I signed up for the San Diego Marathon that was only a few months away and joined a running group. I improved my time by 40 minutes and kept improving until my 6th marathon in Sacramento where I qualified for the 2009 Boston Marathon. 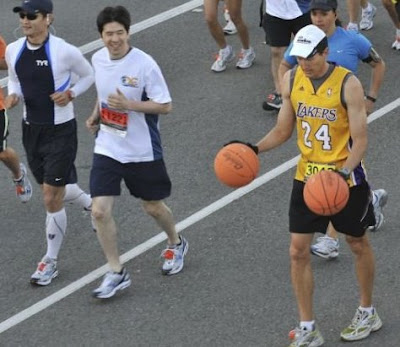 While training for the Boston Marathon my 10 year old son saw in the Guinness Book of World Records that someone ran a marathon dribbling a basketball in London in 4 and a half hours. Being a basketball player and marathon runner he thought it was a great idea for me to try to break the record. During my record attempt in the 2009 LA Marathon I called him at mile 18 physically exhausted and told him it wasn't a great idea but went on to break the record by 42 minutes. I held the record for a year before a man in Michigan broke my record with an incredible time of 3 hours 21 minutes. Not to be out done I decided to complete the 2011 Orange County Marathon dribbling two basketballs. Unfortunately, one of the balls popped at mile 7 and had to wait a half hour for my wife to bring me another ball. Unsatisfied with the time I decided to improve the record two weeks later at the Pasadena Marathon. There I set a new world record with a time of 4 hours and 55 minutes. Fortunately no one has been insane enough to break this record. 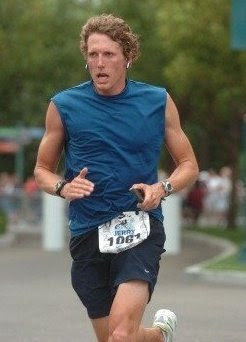 My 11 year old daughter likes to say she can't even remember when I wasn't a "runner". Over the past 5 years I've run 23 marathons including a 100 mile ultra and two 50k races, an Ironman Triathlon, and won/placed in my age group in many 5ks, 10ks, and half marathons. It has become a lifestyle for me. I eat well and live life to its fullest. I love to run in the sun, the rain, in the cold, on the treadmill on vacation and hope to keep running the rest of my life.
-Jerry Knox-
Posted by Walking Diva at 4:34 PM