In the "Spotlight" with Charles

Meet the amazing Charles from Los Angeles California.  Can you guess how young Charles is?  This awesome man is on his 3rd round of the 50 states and has run over 150 lifetime marathons at the young age of 74!!! 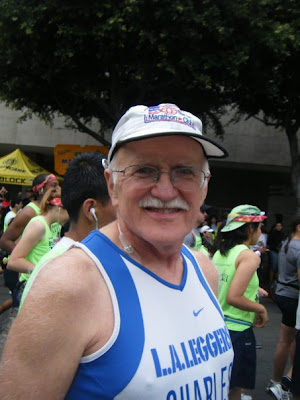 The San Francisco First Half Marathon - Sunday July 31, 2011
I had a good run with the first half marathon. In 2009 I ran the full, it took me 6:40. I had gotten lost that added about 20 minutes and finishing that far behind was not fun and it was hot. So the next year I ran the second half, and the approach to the finish line was much better. This year I decided to the first half and complete all three runs. After I had entered they announced a special medal for those who had run both halves. This was my fastest half marathon since the Virginia Beach Rock-n-Roll half in September 2006. A friend who has been running marathons recently at my speed of 6 to 6:30 three weeks before had finished a half in 2:30. I was impressed and wondered if I could do it. Figured probably not. I had had some good training runs in Griffith Park including seven 9 miles during the month of July. These days I don’t hear the beep of a watch so I count double paces (every other time my foot comes downs which coincides with my breathing pace.) I got to the point where I would run 55 and walk 30, except on down hills where I run 80 and walk 30 and on up hills it would be run 20 walk 40. 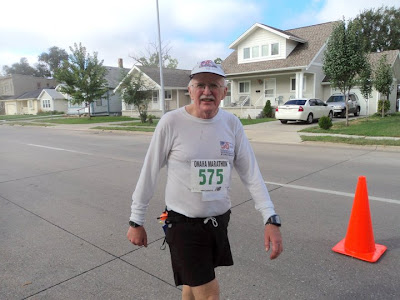 For the SF First Half I kicked it up to 60 x 30 and started with this. In the early part of the race saw runners wearing the SF t-shirt but they said “Worth the Hurt”. I figured that was a fund raising group. When I got to the hill at mile 2.5 it was steeper than I thought so I did not run any, but on the other side ran about 150 and walked only when I got to the bottom. I continued the 60 x 30 until the approach of the Golden Gate Bridge. Again this was steeper than I remembered and walked up this. It was back to the 60 x 30 over the bridge and back. While northbound I passed a guy who looked like he might be in my age group. Said “hang in there” as I passed him. On the way back across the bridge my overall pace as 11:30 which would have been good enough for a 2:30 finish. After coming off the bridge there were some down hills which added to my speed, but the up hills slowed me more. When I got to mile 12 at 2:20 I knew that no way could I make the last 1.1 miles in 10 minutes particularly when we were running up hill. In fact it took 15 minutes and I finished with 2:35:04. This was my fastest finish in almost 5 years. After finishing I got some water and the first half medal. I then looked for the truck with my gear bag. This was the most unorganized I had ever seen. Then I realized why. Usually when I finish it is at the back of the pack. By that time the gear truck is nearly empty. When a volunteer see me approach and he runs my gear bag out to me. This time I was not at the back of the pack. 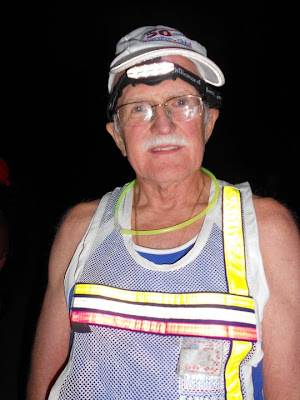 then start walking to the bus to the start. It was a long line and I got to talking to the guy I had passed on the bridge. His name was William, he was from Modesto and he was 76 years old. (the age group was 70+). He said this was his hardest half marathon. He said he and run 10 marathons (7 of them San Diego) and 12 half marathons. He said he ran his first marathon at age 68 (for me it was 64). As sat next to each other on the bus. He asked if I had gotten my medal for finish the two halves. I told him “no” as I thought they would be mailed out. He said they were being given out. I had see those fancier medals and the inscription “Worth the Hurt” and figured it was for those in the fund raising program. He said it was for finishing both. I was disappointed that I did not get mine, and concluded it was not worth driving back to the finish line of the first half to get that medal. When the bus dropped us off near the start/finish of the marathon which was also the finish of the second half I thought I would ask. I figured they would not have mine because at the end of the second half they would a list of those who had finished the first half last year and use that to determine who got the medal. I went to the information booth and explained that I had second half year (I was wearing the bib of a first half runner). The person I asked went to the back of the booth and got a medal for me. It was a nice medal with a spinning part that had the golden gate bridge on one side and Haight – Asbury on the other. She did not ask my name nor check a list. 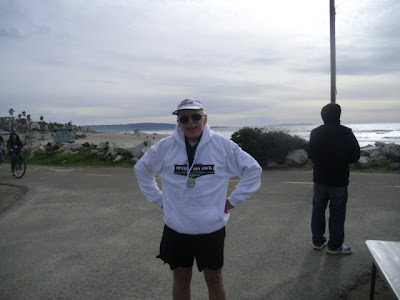 When I got home I checked the results. I came in 5th out 15 in my age group. And out of 6496 finishers I tied for 5th oldest (top 0.1%) and finished before all of those older than I am. The guy from Modesto was tied for oldest. And of the 15 in the age group I was the last to cross the start line, some 1 hour 4 minutes after the first runners started. Chip time is nice.
After doing as well as I did at SF-FHM I started thinking about running the full next year. I know where I got lost in ’09 and maybe could do better and not finish after they have moved the race to the crowed sidewalks.
See you out there.
Charles
Posted by Walking Diva at 2:26 PM

Labels: In the "Spotlight" with Charles