In the "Spotlight" with Marina

Meet the outgoing and pretty Marina from Irvine California! 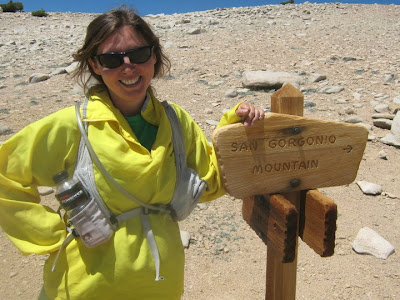 Who would have ever thought I would love running in marathons? Definitely not me! I remember dreading the weekly half-mile and monthly mile I had to complete in P.E.  But then in my final year of high school, two life-altering events occurred. First, I volunteered at the Pacific Shoreline Marathon, where I was inspired by the vigor and enthusiasm of thousands of finishers. Second, a club I was in decided to raise money by completing the LA Marathon 5K. I can still vividly recall that race morning in March 2004, dressed in my cotton sweatpants and t-shirt ready for my first race, where I struggled to make it through 3.1 miles. Afterward our group walked to where the Marathon was finishing, just as some of the fastest runners were concluding. I felt so encouraged to see lines of people cheering for these awesome runners who had just blazed through 26. 2 miles. I felt this might be just the type of motivation for exercise that could keep me active for life, so I decided that by the next year I would double my racing distance to the 10K!
It helped that I was heading off to UC Santa Barbara for college, where beautiful places to jog were abundant. The training was a challenge for me, but by March 2005 I completed my first 10K, The Great Race of Augora Hills. I was enjoying jogging so much that I invited my roommate to train with me for my next goal distance: the half marathon. In January 2006, we completed the OC Half. My sights were then set on the magical marathon distance. Could I do it? The other distances had not come easy to me but the marathon always had a mystical quality, and I was determined to train and put forth my best effort. 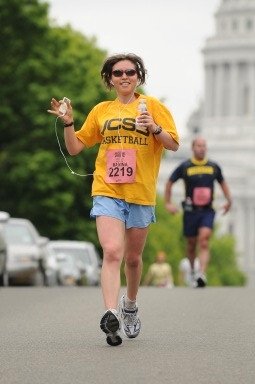 Pacific Shoreline was symbolic for me of the places I had lived and run in my life near the west coast, so I decided to make that my first marathon in February 2007. I trained hard and smart and had a fantastic time on the course. Crossing the finish line was exhilarating and shortly after completing it, I signed up for the next one- the Zurich Marathon for April 2007, when I would coincidentally be playing tourist in that area over spring break.  The double excitement of the travel and the racing inspired me even more. I learned that there were groups that aim to run marathons in all 50 states and 7 continents, as well as to run at least 100 total marathons and these became my new goals! I have had such a fun time in this pursuit, and am happy to report that I am more than two-thirds of the way to completing all these objectives (68 marathons including 31 states, 5 continents) .
Of course even when I achieve these goals, there will always be another finish line to work toward. In summer of 2008, I achieved another long sought after dream of joining the Marathon Maniacs when I completed my first double marathon, another milestone for me.  Since then I have completed a few other doubles, as well as a triple and quadruple marathon.  I love the new challenges that the jam-packed marathon calendar offers and recently I have focused on some tough trail marathons, ultras and hikes in preparation of my goal to complete Pikes Peak Marathon in August 2011 and summit Mt. Whitney in September. 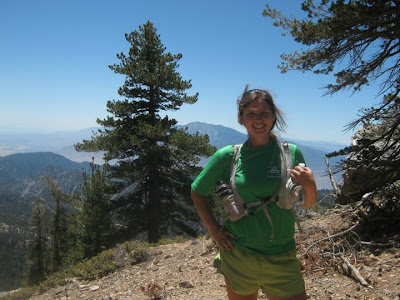 For me, nothing can compare to the invigoration I feel when I am participating in marathons. They will always be an integral part of my life. I have met so many amazing people, explored such diverse landscapes, and discovered much about myself in the process. Even though I have just shared this brief story focused on me, I know one thing for sure: it certainly never would have been possible without the blessing of having a lot of fabulous individuals in my life-- many great friends (running and non) supporting me, volunteers and spectators cheering us on, my Mom for shuttling me to races at all hours of the day and night and helping me during them, and Christ, who always offers divine Strength. My story, along with those of other racers, still has many more chapters to be written.  What new and amazing journey will be next? Where there’s a will, there’s a way—so go for it!!! 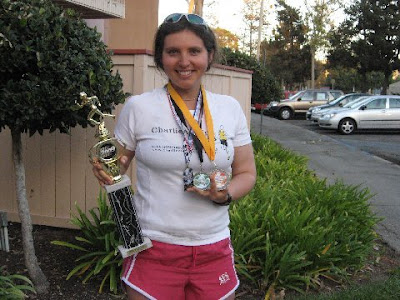 I have a blog of all my adventures in racing & marathoning: http://marinamarathons.livejournal.com/
-Marina-
Posted by Walking Diva at 4:05 PM

Labels: In the "Spotlight with Marina