In the "Spotlight" with Ginger from Washington

Meet the fabulous and fit Ginger from Washington!

My running story has humble beginnings. In high school, I participated in sports, including track and field, but wasn’t a runner. I had attempted a short race in 9th grade but my heart and body weren’t interested. The shot-put and discus were my events and I did my required 2 lap warm-up and not a step further.
After high school and a year of marriage, my weight was up and I started at-home workouts with Jane Fonda and Billy Blanks. Some friends ran 4 miles during their lunchtime and invited me (a lunchtime walker) to join them. After I picked myself up off the ground from laughter, I eventually conceded and found I could complete the distance, albeit slowly.
I was a stay at home mom, homeschooling and totally invested in my daughters. My husband and I began running together just to have some alone time. Running had been put on the back burner since the birth of my first daughter.
In 2000, I felt the need to do something totally new to celebrate a new century and convinced my husband to enter a race. We did our first 10k and I won an age-group award! A competitive fire was lit that day.
The 2001 Portland Marathon inducted me into a whole new world of running. I followed the Galloway program because running a marathon without a walk break seemed impossible and I may never have kept going. I finished in 4:21 and I have NEVER looked back!
I ran the Seattle Marathon the next year in 3:51 and found out I could QUALIFY for Boston Marathon with a 3:40. 3:48 in 2003, 4:05 in 2004, and in 2005, my husband promised that if I qualified, we would go to Boston . I had turned 35 and my qualifying standard was 3:45. I crossed the line in 3:42:31! He was a man of his word.
I went on to run in the 2006-2008 Boston Marathons. I clocked my second fastest marathon at Boston in 2008 in 3:17:11. 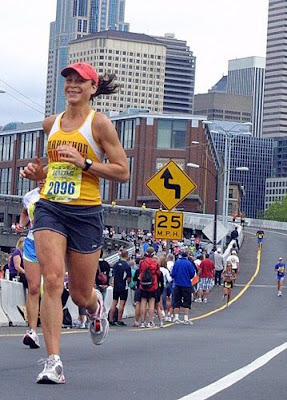 In 2007, after completing my second Boston in April, I ran the inaugural Tacoma City Marathon in May. I discovered if I could run one more marathon by the end of June, I could be a Marathon Maniac so I signed for the Discovery Bay Marathon in June and was admitted as #607!
Since I began racing, I have moved up from “middle-of-the-pack” to a top age-group winner and sometimes am in the top 3 overall winners. My old self, the one who didn’t want to be seen or heard, who felt inadequate and overweight just needed to start moving and believing the seemingly impossible. I’m over 40, have kids, am not coached, and have no “natural” running ability. What I do have is the desire to be more, do more, and expect more. My fastest marathon of 3:16:34 was at Winthrop 2 weeks ago!
Motivation can come in many forms; inspirational stories, setting goals, pictures and quotes, etc. I have used all these to push myself on days when I would rather be lazy. Another strategy in my arsenol is NEGATIVE reinforcement. It's not for everyone, I know that! During one of my early 5ks with one mile to go, I passed a "who has tickets to the gun show?" kind of guy who was struggling and he muttered, "Stupid girl!". Well! He was frustrated that a GIRL was passing him. I took that and have held it close to my heart as one of the biggest compliments I've ever received. I'd like to think that when the race was over, his idea of what women were capable of doing was elevated. Even if it didn't, I remember that as one of the first days I truly felt powerful in racing.

My love for running has evolved into a general love for physical fitness and I continue to pursue knowledge for myself and others. I am a certified personal trainer, promote health in every way possible to anyone who will listen and blog about my running and racing adventures. I’m currently a 4-start Maniac and will be running my 40th marathon in November. I'll see you at the races!
You can read about my running adventures at  www.chocolatecoveredrunning.blogspot.com 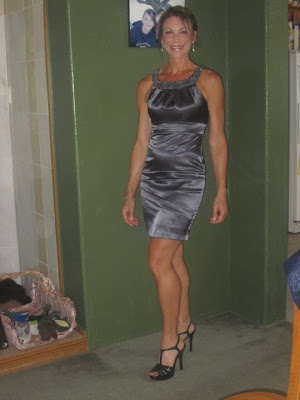