In the "Spotlight" with Cyndie from Oregon 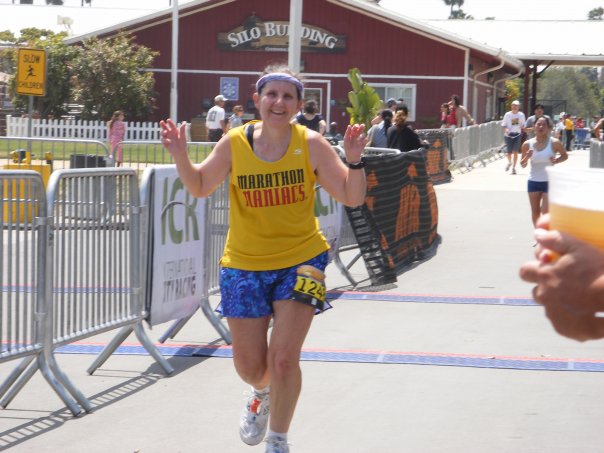 Early in 2011, when Yolanda asked me to tell my running story and my goals for the year, I felt some trepidation in telling that I was going for six Marathon Maniac stars by running 31 marathons in the year. As time went on, though, and I watched Steve Walters racking up the races for his ten stars (52 marathons in a year), running 31 started sounding like a crazy idea. Why would I not run 52 and go for the ten!? And so a new plan was born. I ended up with 61 marathon (or longer) races in 2011. And when Yolanda asked for an update, I thought of mentioning a few of the people and races along the way.
In March, I tried Wildman Willet’s Pac-Rim One Day race. This was my first attempt of a timed race (run/walk as far as you can in a certain length of time). Rose Bak, Esther Williams, Fenny Roberts, Monte Pascual and more friends were there as I walked and ran around Lake Sacajawea. Sometime after dark, with my feet killing me, I slunk away after 51 miles in 14.5 hours. Yakima River Canyon was my eighth marathon of 2011. Lenore and Bob Dolphin (who is on track to complete his 500th marathon there this year) put on an awesome event. The pre-race pasta feed featured my friend and mentor, Dick Beardsley, with another inspiring talk. The Yakima course is beautiful, mostly downhill with a memorable uphill section toward the end. The event is not complete until attending the post-race baked potato bar and awards ceremony. Everyone is recognized for their own accomplishments and all are celebrated.

The Firecracker Triple, with two races directed by Steve Walters and finishing at Sauvie Island on July 4th, accounted for my 20th, 21st, and 22nd marathons of the year. Steve did a fabulous job coordinating these events and the post-race fresh strawberry shortcake at Sauvie Island is the best. Don’t tell anyone that I had three helpings this year. Sauvie Island offered one of many chances to see Mr. Larry Macon, who went on to finish 113 marathons in 2011, beating his own world record for most marathons in a year by a man. 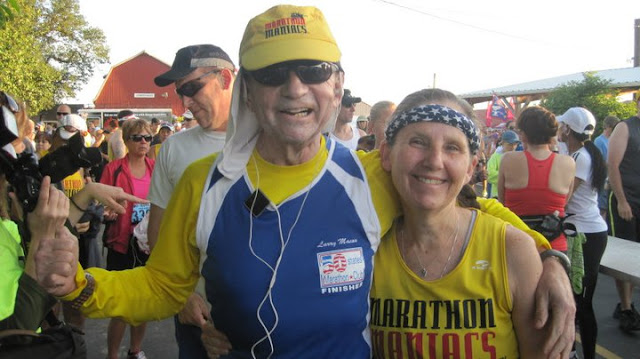 Mid-August, the 12-hour Transcendence run offered me a second chance at finishing a timed race. Again, many friends were there for support, notably Rose Bak and Sarah Duncan. The venue also played host to a woman walking her pet bobcat, which I believe was the oddest animal sighting of the year. A good time was had by all and following that race, the great Across the Years 48-hour race plan was devised. We would spend New Year’s Eve in Phoenix.
Labor Day weekend, marathons 30, 31 and 32 were hosted by Charlie Alewine in a wonderful holiday triple in SoCal. The last day, in Dove Canyon, I was treated to the company of Yolanda Holder herself, as well as Endorphin Dude and the usual cast of characters at a Charlie race. 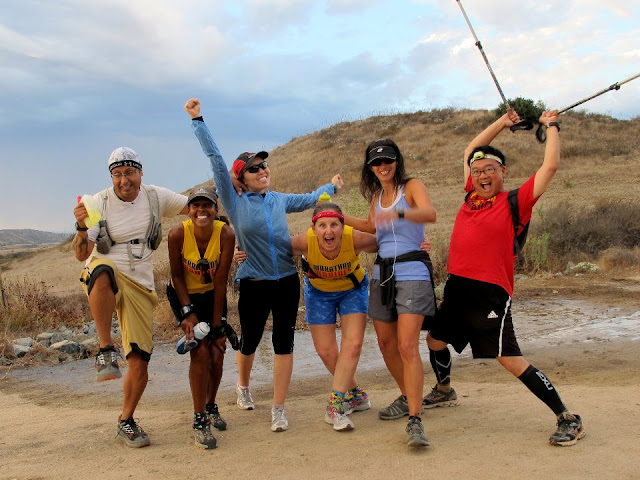 The end of September features the Lake Tahoe Triple, masterfully directed by ring master Les Wright. Cathy Troisi took the year off to crew, having completed the first ever Tahoe Double Dare (twice around the 72 mile course) in 2010. It was great to see Stephanie Harris and Irlan Hebner. 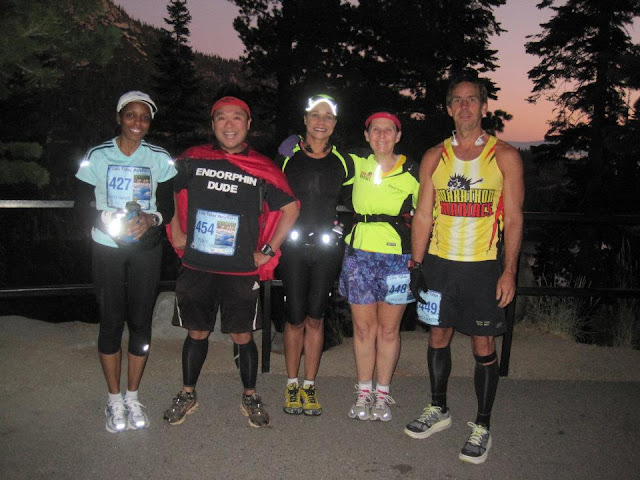 In October, four double marathon weekends put me at 47 marathons for the year. I was closing on my ten stars. I was thrilled to finish my ten star quest at Adrian Call’s Veteran’s Day race, November 11, 2011. Adrian puts on several races a year and works hard to make sure everyone has a great time, is well-supported, and achieves their goals. Jane Herzog kept me moving and the race featured nearly being blown off our feet by a helicopter in use to search the nearby waterway. 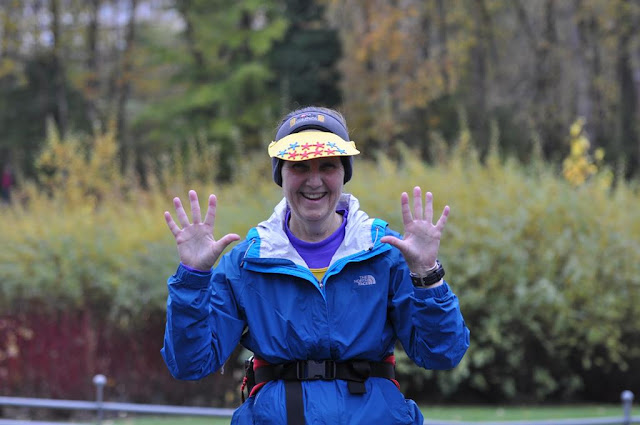 The hardest course of the year was the day after I reached titanium. Good thing, because if I had been any less strong, I could not have completed the Issaquah Alps 50K. Diana Robinson and race director Rob Stretz stayed by my side the whole way as we climbed three mountains, Cougar, Squak and Tiger. A trail course with sections virtually straight up. Right after we passed the “Trail not maintained” sign, I knew we were done for. First time ever buying pizza during a race (at Costco, near the end).
Thanksgiving weekend featured the Seattle Quadzilla, four marathons in four days. Thank yous go out to all the race directors, Matt Hagen and Betsy Rogers, Bill Barmore, and Scott Krell and, of course, coordinator Steve Walters. A great time was had by all. Thank you to Jane Herzog and Ray Shaw for a fabulous Thanksgiving dinner and wonderful company. 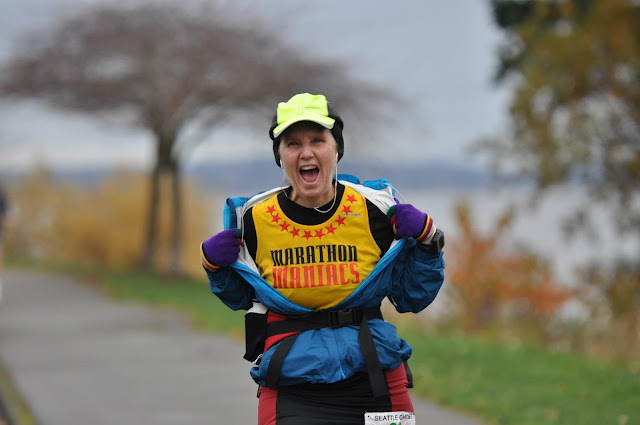 The year concluded at Camelback Ranch doing the 48-hour Across the Years race. The venue was perfect. The company, Rose Bak, Sarah Duncan, Endorphin Dude, Jill Hudson, Marilou Russell, Susie Ro, and, of course, Yolanda, was superb. And, my daughter, Phoebe, who was there for me throughout and probably ran/walked well over a marathon’s distance herself, was a Godsend. Together, they got me through over 100 miles and earned my first buckle. Thank you one and all for a fabulous year. 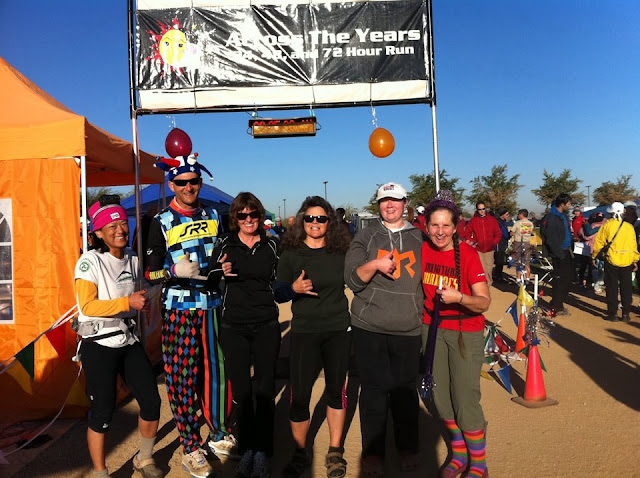