In the "Spotlight" with Jessica

Meet the fabulous Jessica from Fontana California.  She's got style,class and a love for running. Nothing can stop this gorgeous woman from enjoying life!!! 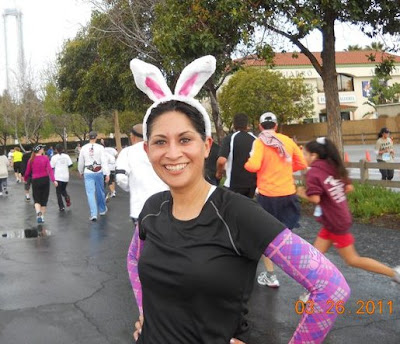 If you were to ask me at least two years ago if I liked running or wanted to run I would laugh and say No! I never considered it until one day my cousin who is a fellow Marathon Maniac talked me into running my first half marathon in 2008 (Long Beach) and I decided to take the challenge, after all she had already inspired me and I would tell myself I want to be a Marathon Maniac like her one day with all those crazies and see what it’s all about. I had two months to start training for my first run and I had only been able to get to 6 miles but wasn’t going to let that stop me.  I figured it would also be a good way to start being active and lose some weight as I was up to 198 pounds when I completed my first half marathon. I also began to worry as my mom became a type 2 diabetic and she’s the first to ever have it in our family. I decided to start making a change and be healthy and active.  I completed my first half marathon and was so sore that I loved it and got hooked from then on. 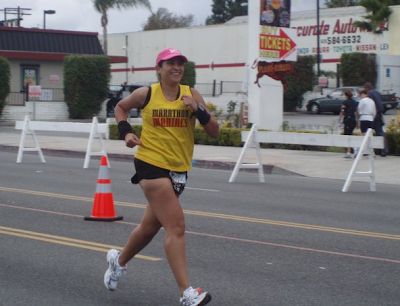 I started to focus after my first race to train better for my next half marathons. I also remembered that my hometown of Fontana had a half marathon known as the world’s fastest half. I registered and ran it and never once imagined running a race in my hometown I had grown up in for over 20 years. I later got the itch for a longer distance and considering I was around other crazy runners I wanted to take on the challenge and put my body to the test. I decided after running half marathons for 5 months to train for a marathon and followed a training schedule and kept to it with my weekend long runs and had plan to run Long Beach as my first marathon in October 2009. It turned out I got ahead of schedule by two months and Long Beach happened to be my qualify race to join all my crazy running friends as a Marathon Maniac and belong in a family of people who have the same passion as I do for running.  In 2009 I finished and met beyond my goals as I finished the year with 4 marathons and 12 half marathons. 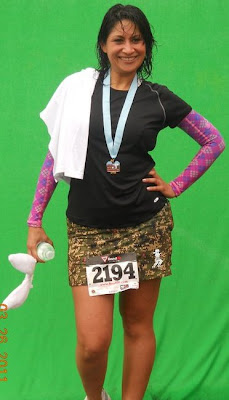 In 2010 is when I feel my journey and adventure began as I felt good and finally able to do something for myself. My journey I began with running felt the same as when I completed school and received my bachelor’s degree in business. I struggled, fought, battled but I never gave up and stayed positive and proved every time I can do it.  The running community has been a blessing as I’ve met many wonderful people who are all inspiring and it has taken me to many places I never imagine I would see or be at.  I traveled and ran almost every other weekend yet I felt I needed to take on another challenge. I took on a love for trail running and pushed my body to other limits and decided to end my year with my first ultra marathon distance of a 50k. 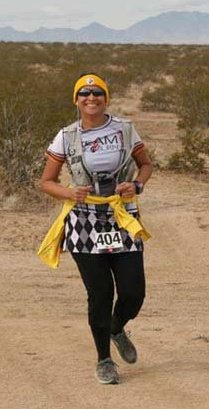 Some may say 2011 did not start off well for me and I would agree as I got really sick with a bad cold and flu (Happy New Year :o)…I had to cut down on my running and get better, well just when things got better I went out on my first trail run of the year and took my first trip and fall on the trails. I didn’t think any of it but it did hurt and got a few cuts. Two days later I start to experience pain on my back and ribs and I checked myself twice to urgent care within a week and get x-rays taken and told its nothing. It became so bad I could barely get up and walk and knew something was not right as the pain got sharper and strong and had myself checked in ER. I learn that I had gallstones and was told that I will need to come back for an outpatient surgery.  I stayed positive and looked for options and did my research and went the natural way and flushed them out along with following a treatment plan and strict healthy vegetarian diet. I lost about 20 pounds in a month, which is a lot and wasn’t the way I had planned on losing weight but my health condition was the cause of it. I was off from running two months and ran LA Marathon as my first run after recovering from gallstones and avoid surgery. I’ve never felt stronger and healthier than ever before and now I’m running more and doing less walking in my races and feel I have more energy.  I learned that one can reach for the stars and accomplish goals if you believe and stay positive. I tell many people to reach for your goals and you can do anything you put your mind to it, it’s taking the first step that is hard and once you take it things move much easier. I enjoy running as it is my therapy and it relaxes me and makes me happy. When I’m not running I enjoy spending quality time with friends and family. I also like to give back to the community and volunteer at races or show support and cheer fellow runners.
-Jessica-
Posted by Walking Diva at 8:36 AM

Labels: In the "Spotlight with Jessica