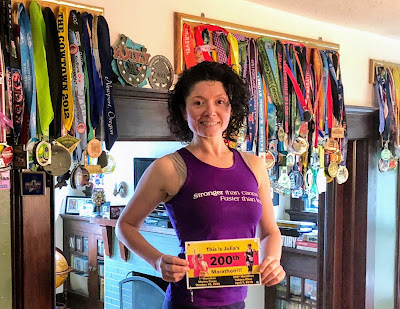 I ran my first marathon in 2005, the Marine Corps Marathon.  I ran it for the Friends4Michael foundation, which raises money for children who are battling brain tumors and their families that need extra assistance, etc. I was raising money and awareness for children with Brain Tumors because when I was 24, I was diagnosed with a brain tumor. I was lucky to have youth on my side.  After two surgeries, I was left with a very weak and unresponsive body but I had a great team of doctors in my corner and my own sheer iron will and eventually I learned to stand, walk, and run.
I was lucky enough to live in NYC and had an amazing team of specialists but also I was lucky enough to witness the greatest show on earth, the NYCM go by.  I watched for hours and while I couldn’t walk unassisted at the time, I got inspired.  I decided that one day, if God gave me the strength, I was going to do that. 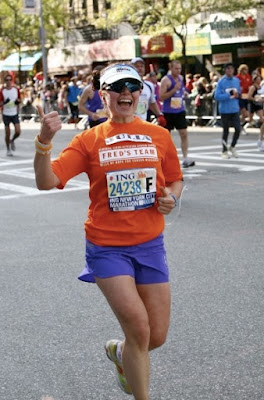 I eventually ran the NYCM and raised funds for MSKCC, the hospital where I was treated.   I never felt more proud of myself as when I ran passed the hospital with ‘survivor’ on my arm.
In 2006, I ran 2 marathons, both for the National Brain Tumor Foundation in LA and SF, 4 months apart.  It was that year that I learned about the 50 states marathon club, at the expo.  Instantly, I thought it was an amazing idea and a seed was planted in my brain.  I would get to travel the country and see friends who left NYC and visit National Parks and raise money for charities I believed in.  It fit me to a T.  I am a virgo, I’m type A personality, I like to check things off the list.  Doing a marathon in all 50 states, even though I’ve only run 3 marathons, was exactly what I needed.

In 2008, I ran 3 marathons, New Orleans LA, Chicago, IL, and NYCM setting a PR with each and every race.  I was falling in love with marathoning and learning that I was much stronger than I ever thought I was. 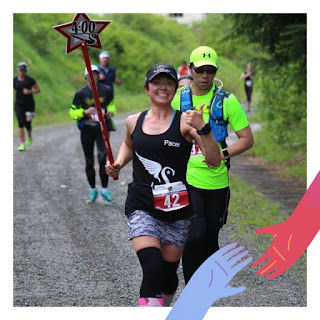 In 2010, at the Pineline Trail Marathon in Medford WI, I met a fellow 50 staters named Shane Garling form AK.  We instantly connected and discussed states we both needed to complete our journeys’.  It turns out he needed NY and I needed AK, so we exchanged contact information and decided to keep in touch.

In 2011, I ran a race with him in AL and met a Marathon Maniac from DC that would introduce the Marathon Maniacs to me and my life as I knew it, would never be the same; it was forever changed by the number of marathons I would run. I joined the Marathon Maniacs in late 2011 because I wanted to join with 4 stars, it was the double in NH/ME that sealed the deal for me. Once I joined however I realized that I could have joined two years earlier then I did and I could have been inspired even sooner.  But everything happens in its own time.

It was joining the MM’s that opened me up to what was possible.  I thought I was doing everything I can by running 4 marathons a year, and my non running friends thought I was nuts.  But when I saw that people were doing a marathon a weekend, well that planted the seeds for what was to come.
I decided I wanted to push my limits and see if I can run a marathon a month.  Shane, my new friend, was doing a marathon a month and I wanted to continue to spend time with him so in 2011 that was my goal, but that year, because of the influence of other Marathon Maniacs, I did 19 marathons, and in 2012 I surpassed that goal with 32 marathons so I can become Titanium Level, the highest level of the Insane Asylum. 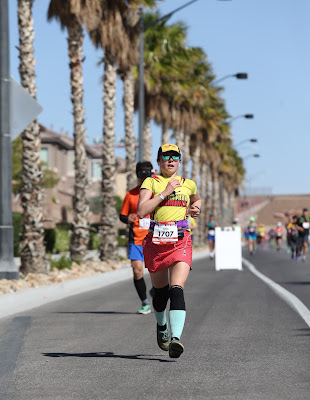 In 2013, at the Louisiana marathon, Shane proposed to me at the finish line. In 2014, at Maui Ocean front marathon, both his and mine 50th state marathon, that we have been planning for 2 years now, we made it official and became 50 state finishers and husband and wife when we crossed the finish line. Our ceremony was at mile 17 of the course, we had a lovely ceremony, which lasted about 30 minutes with all our MM and 50 stater friends surrounding us. 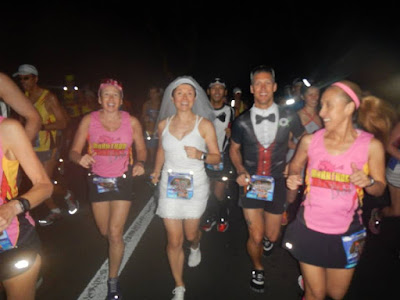 Today I’m at 237 marathons in 14+ years and I am 10 states shy of completing my 3rd round of the 50 states. I no longer run marathons for speed like I did in 2006-2009, now I run to help others.  I Pace marathons all over the country now and I help others achieve their goals and dreams.
I am a Licensed Massage Therapist and Registered Yoga Teacher and Running Coach but all that came about because of my passion for running marathons. I spent 15 years in finance doing what I thought adults do, a job they didn’t like, and enjoying my marathoning hobby on the weekends.  But in 2008, when the market tanked, I decided to make a change.  It was the universe giving me a 2nd chance yet again.  It was time to start living my passions full time instead of the weekends.
Running has brought me to a new career, the love of my life, my husband Shane, and ultimately, running has brought me to myself, someone I can be proud of today.
I went from being ‘cancer girl’ at the office to ‘runner girl’ and today I am living the life of my dreams.  I can’t thank marahtoning enough for that. 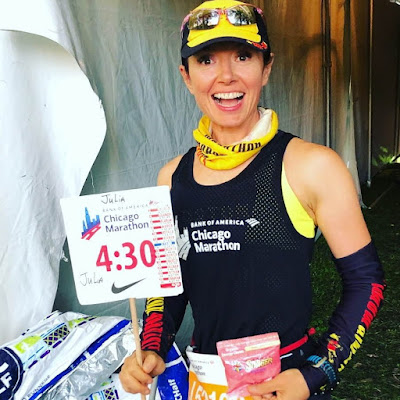 Here are just some articles about me