Amy Has a Running Addiction! 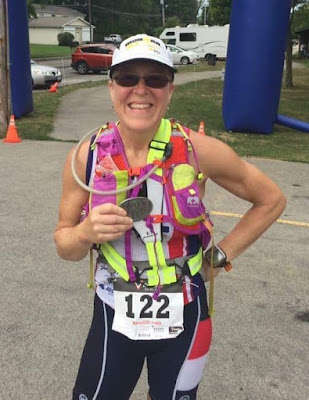 I am not fast.  Let’s just start with that.  But… it turns out, fast is relative.

For me, running is about finding my inner strength.  I was an overweight, sedentary, nerdy kid who hated all forms of exercise.  Except badminton… I liked badminton.  In 9th grade I joined the track team.  I vividly remember the first days of track, where we were all tested as to our strengths.  It turns out I had none.  Or so it appeared.  In high school track, at least in my day, there were 2 types of runners they assigned to the quarter mile race.  Those who could run it really well… and those who couldn’t run anything else well.  I fell into the latter category.  My first painful quarter mile sprint was 90 seconds and change.  For non-track runners, this equates to ridiculously slow.  Nonetheless, I persevered.  The track workout I remember best was “quarters” practice.  This was a brutal form of torture in which the coach has all runners sprint a quarter mile, rest for one minute, and do it again.  6 times.  Then there was, perhaps, a 10 minute rest, before we did the whole thing over again.  This was one of 2 times in my life when I truly, truly wished for death.  And yet… I survived.  I didn’t even vomit. 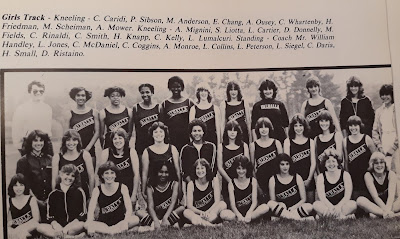 By the end of the track season I had my quarter mile down to about 74 seconds.  Still not fast, but a vast improvement.  And I learned perhaps one of the most valuable lessons of my life.  Which is… it is important to do hard things.  They transform you… they let you know that you are capable of more than you think.  And really, for me, that’s what running is all about.

After that one track season, I didn’t run again for a long long time.  Instead, I took up drinking and smoking.  Which I did, to excess, until I was 22.  Drinking was fabulous – it helped me find my inner self confidence.  Suddenly I was comfortable in social situations…  I felt more confident about myself, and more attractive.  Of course it wasn’t really an ideal solution and I ended up in some church basements learning how to be comfortable without alcohol.  I continued to smoke, though, until I was 30.  And then it was time to give that up too.

I was terrified of gaining weight, so I started to exercise.  My rule was that I had to exercise 30 minutes a day for 3 days in a row, and then the 4th day I got to rest.  I did this for a few years, and it helped keep me sane.  I ran my first race – a Cooperstown NY local 5 K, called the “Coop Loop” because I wanted the T-shirt.  I collected those T-shirts for a few years (they were my standard go-to Saturday afternoon apparel) and that was the extent of my running until a visit to my brother’s house when he and his wife told me they were running the Army Ten Miler.  10 miles, holy crap. That was really far.  I signed up.  Trained.  Ran.  And kept running.  Training for that race was so empowering that as soon as I was done, I signed up for my first marathon.  I didn’t think I could possibly run straight for 26.2 miles, so I trained using the Jeff Galloway run walk method.  I finished my first marathon in 5:02, and just kept running. 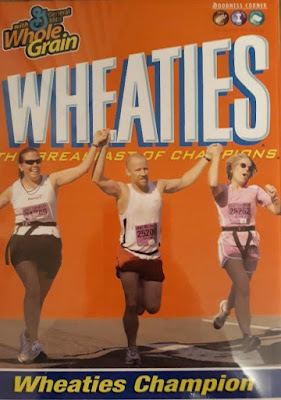 Wheaties box was a gift from my brother

I ran 4 marathons before I ever ran a half.  The only marathon where I said “I’m never doing this again” was my second – the Marine Corp Marathon.  Of course, it wasn’t my last.  I started incorporating triathlons into my race schedule and trained for and raced an Ironman in 2014.  That was when I learned the true joy of endurance events – which is, the friends you meet along the way.  I was part of a team raising money for the Children’s Tumor Foundation and those friends are still important to me.  In fact, one of my teammates, Katy, is who I blame for my first ultra.  I was visiting her in Texas and she asked me to watch a movie – “Desert Runners” – about a group of ultra-runners aiming to complete the “4 Desert” challenge in 1 year. Katy said she thought of me when she watched the movie.  I said “no freakin’ way.  Those people are crazy”.  And promptly signed up for my first ultra on the airplane home from Texas – CanLakes 50 miler, in Canandaigua, NY.
Until that first ultra, I was largely a treadmill runner.  I had a love hate relationship with running at that point – I loved what it did for me as a person, but in general I didn’t enjoy the actual doing.  But in training for CanLakes, I moved my training outside.  And with my first “back to back” training weekend, learned my most important lesson of ultra-running.  Which was… that it was possible to keep running – even after running long the day before – as long as I ran at the pace my body wanted to go.

And with that, I learned Run Joy.  I learned that running doesn’t have to hurt.  In fact, most of the time, it shouldn’t.  It can feel good – great, even.  Finding that zone where you can go forever and ever… there is no meditation that does for me what that kind of running does.
My first 50 quickly led to my first 100 – the Beast of Burden in Lockport, NY.  Which led to my first 24 hour, and then my first multi-day – 48 hours at ARFTA (A Race for the Ages) – a Laz race where you get as many hours to run as you are years old.  This lets you compete on a level playing field with legends.  Doyle Carpenter, Don Winkley, Gunhild Swanson - runners in their 70’s and, some, 80’s, who are just astounding athletes.  ARFTA might just be the most inspirational race on my docket.

I started with “I am not fast”.  This is true.  However, it appears that what I have is staying power.  And as I have run longer and longer distances, completing my first 6 Day race at Across the Years last New Year’s, I have discovered that the longer I go, the more competitive I am able to be.  I have been first place female at several multi-days and seem to have found my niche.

This year I was blessed to run several incredibly meaningful races.  After my 6 day, which was amazing, but very, very all-consuming and hard,  I went searching for races that would give me joy.  I discovered that in spades at The Greater New York 100 miler,  RD’d by Phil McCarthy and Trishul Cherns.  This race introduced me to journey running – where you are running not to win, but to explore new terrain on foot.  Letting myself not focus on a time goal but rather just immersing myself in the experience was freeing and gave me perhaps more joy than I have ever experienced in a race.  I felt like I took a 100 mile vacation through New York, in 24 hours, on foot.  I stopped to dance on the boardwalk on Coney Island, my running partner Larry Huffman cracking up and videoing me on the side, and I was in my perfectly happy place. 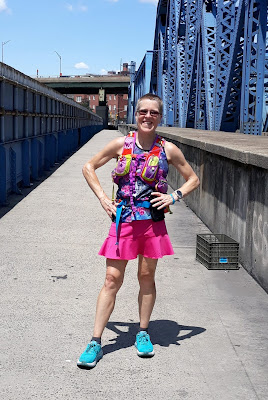 TGNY.  Pure Joy.
And, just a few months ago, experienced one of the other most meaningful races I’ve run – Spartathlon.  This was a 153 mile trek across Greece – starting in Athens, and ending in Ancient Sparta.  I had signed up at the urging of Bob Hearn – one of my all-time idols, and was blessed to have him assist my husband BJ as my primary crew at Spartathlon.  Because I had completed longer distances in the past, I was not expecting this race to be as hard as it was.  The early cut-offs were rough, and I went into the race fully prepared that I might DNF one of the early cut-offs, but I had felt that if I made it to mile 50, where the time limits eased up, it would be smooth sailing for the rest of the way.  Not so.  I worked for every mile of that race.  And… it has found its way deep into my heart, with the stunning scenery, the ancient historical aspect, the worldwide team participation, the local support, and the pageantry. 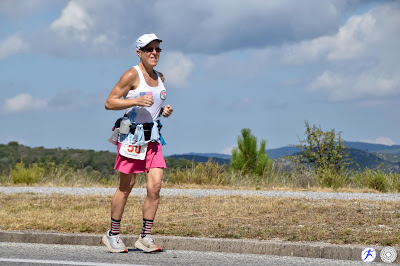 The one and only Spartathlon

Running has given me gifts.  Gifts of strength, and joy, and discovery.  It has allowed me to dig deep, and when there is nothing left, dig deeper.  It lets me know I am capable of anything.

If you’d like to hear more about more story, visit my blog, Running Addiction, at: