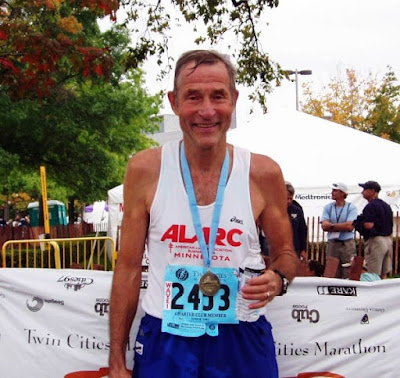 Fast Eddie Rousseau entered the year at age 79, with immediate training plans to be ready for the 100 Mile Nationals in Las Vegas in Feb  and Snowshoe Nationals in Cable Wisconsin in early March. Training went well on his big snowshoes and on his long runs on an indoor tract at a YMCA and YWCA  in Minneapolis, and on the indoor track at Bemidji State University near his cabin in northern Minnesota. Then at a physical exam, cancer was found  already well into the bottom part of his nose. He had surgery put off  till late March to do to national races. The 100 Mile Nationals with crew Erin, a runner as well, went great for over 50 miles but slowed due to a chest cold. Then in the cold of the night he stiffened and slowed so much that  after 88 miles his pace had him missing the 30 hour cut off. So broken hearted he ended his race. The Snowshoe Nationals brought redemption with a National Championship. Then the nose surgery and several weeks off where he says he got soft and gained weight.

Next would come the Cornbelt Running Club 24 Hour Track Race in Iowa which he has run many times. A fun time with old friends and a decent finish. A month later the FANS 24 hour in the Twin Cities, his back yard so to speak. It was the 30th annual FANS 24 Hour and Fast Eddie has run them all, the only runner to do so. His  total miles on a hot day was just over 70, and gave him a 30 year total of over 2800 as he continues to go for the 3000 total in 2nd place and almost 800  miles ahead of the next nearest runner. He surmised that as rapidly as he is slowing down, he may get there by age 90. 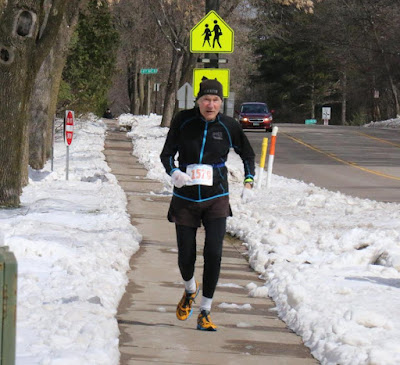 Then a favorite of many years, Grandmas Marathon in Duluth. A great Marathon, great expo, great friends.

There were shorter races from 5Ks to 10 milers sprinkled between the long ones. He says that at this age you gotta keep moving or stay in the recliner and wither away. But to  run, no matter how slow he goes, he is lapping the guy on the sofa.

Then in July came a 6 day race  in the dome run in the Pettit Ice Arena in Milwaukee on an indoor track as hockey games went on on the rinks inside. Did not have to worry about breaking a huge sweat there. He  had surprising  foot and back issues that resulted in his worst 6 day total ever. 283 miles, though he recalls he was ahead of the other runners in the 75-79 age division. But he said that the real joy in ultras especially and any race he runs is the friendships new and renewed. Newton Baker, Don Winkley, Jimmy Barnes, Yolanda Holder to name just a few, but to name any is not doing service to all the many other great friends who were there.  He had a number of friends crew for him, some who had never been to an ultra. 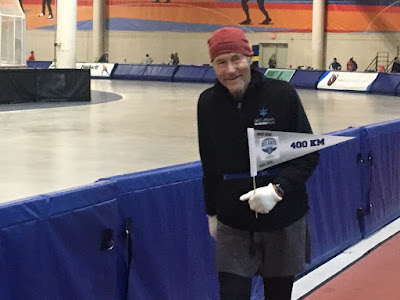 August had him at the Paavo Nurmi Marathon in northern Wisconsin , another favorite where he sees running friends from Minnesota, Wisconsin and the Upper Peninsula of Michigan where he grew up. He ran the Paavo faster than a year earlier.

September had him excitedly celebrate his 80th birthday and 36 years of sobriety. But on a sad note the passing of a few close co-workers and also through the year 3 classmates. His little High School Graduating Class of 21 is now down to just 8. September brought him to the 24 Hour Nationals in Cleveland at Edgewater Park on the shores of Lake Erie two days after he moved into the Age  80-84  Masters Division. This one was hot! 88 degrees on a blacktop path. he saw only 5 runners get to 100 miles or more. He recalled his first 24 hour nationals where he got 121 miles and didn't crack the top ten.  Foot problems from the heat, and back problems kept his total to 70 miles, but well ahead of his nearest competitor and in 28th place of 112 entries. Not bad at age 80. 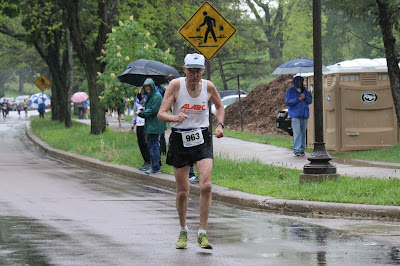 Then one more, in early October, his favorite , the Twin Cities Marathon in it's 38th year and Fast Eddie one of 18 Charter Member starters who have done them all, Eddie being the oldest of the group. . The 6 hour finish cut off ultimately gets them. Fast Eddie had a terrible 5 hour 56 minutes a year earlier thinking what happened since if PR of 2 hours 57 minutes in 1984.  Now slimmer than last year, he still he had hopes. As the only runner over age 80, a major local TV station, WCCO CH4  did a pre-race story on him on October 5th, the day before the race.  Perfect weather he ran a 5 hour 24 minute marathon, still alive as a charter member.

As a dear friend and great runner a bit older than Fast Eddie, told him, we got to keep having dreams. So for 2020 at a solid age 80, Fast Eddie is dreaming and already entered into the 100 Mile Nationals in February in Las Vegas, bound and determined to beat the cut off. Happy, he ends 2019 with 110 marathons and 122 ultra marathons and having medalled in 38 Nationals, with 23 of them gold medals. But to Fast Eddie, the number of dear friendships  made over the years are worth so much more than medals..

-Fast Eddie
Posted by Walking Diva at 6:01 AM