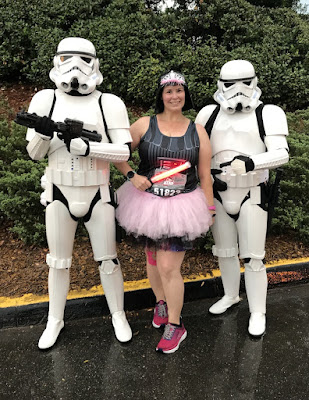 2019 had some ups and downs. I was supposed to complete all 3 races during the Disney Princess Half Marathon weekend but about a week prior, I had to withdraw because I came down with pneumonia. I was disappointed but know that it was a blessing in disguise.  I had recovered enough to complete two races I had previously signed up for. The first was the Wounded Warfighter/Lone Sailor 10K, my second to date. It was an emotionally trying race but I crossed the finish line with a better time than my first 10K the year prior. The second race was the following weekend and was the Star Wars Rival Run 5K. The race was delayed due to lightning in the area, and even though it was pouring, it was such a fun race. At the packet pickup the day before, I had the honor of meeting Jeff Galloway. 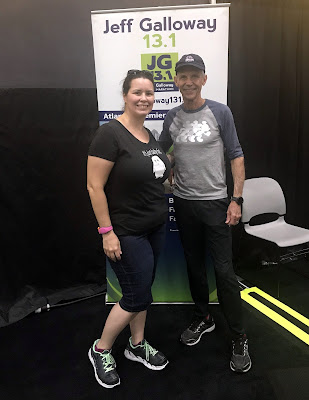 After that things with my back went downhill a bit. It would take me 30-45 minutes to take the short walk from my parking spot to my apartment. My PTSD was also slowly getting worse but I kept pushing forward. I had finally found a doctor who listened to me and properly treated my back and I had a rhizotomy procedure done in September. My timing is somewhat impeccable because earlier in the year I had committed to doing the Stephen Siller Tunnel To Towers 5K to honor the memory of the first responders who made the ultimate sacrifice on 9-11. The Tunnel To Towers race was just short of a week after the procedure, and in hindsight I should have pulled out of the race but I felt that I could not go back on my word to honor the fallen. At packet pickup I was given the picture and bio of Firefighter Brian Sweeney of Rescue 1, and I carried his picture with me for the entire race. It was my slowest ever 5K, and I even had other runners ask me if I was okay. Again I was able to cross the finish line through faith and sheer determination. 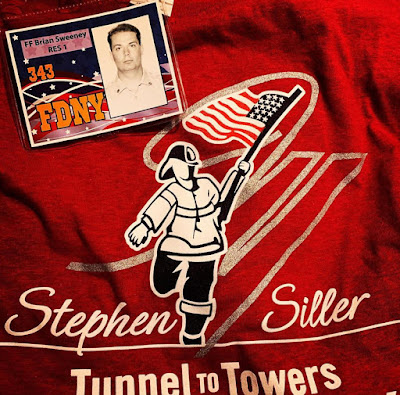 Speaking of impeccable timing, the following month I had sinus surgery and the weekend after I had a Halloween 5K that I committed to do with one of my best friends, Sandra. There were some ladies there who had absolutely terrifying costumes... they were dress as the balloon ladies from the Disney races. My friend and I talked with them and they were the ladies that do the races and are the unofficial pacers for the 10K, Half and full marathons. For anyone who hasn’t been able to do a Disney race yet, the balloon ladies run the minimum pace requirement of a 16:00 minute mile. My friend and I started the race right next to them and my goal was to stay ahead of them as practice for my next timed Disney race. I know without a doubt, if it had not been for Sandra, I wouldn’t have done near as well in that race. We stayed ahead of the balloon ladies the entire time and I reached a personal best and had an average pace 14:49. 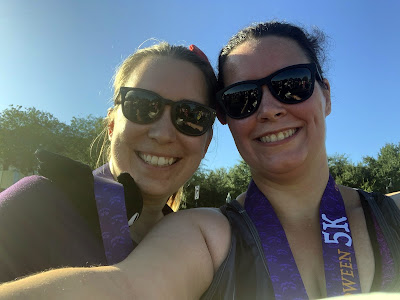 A few days after that I had the honor of being a co-captain for Potterhead Running Club’s Fall Quidditch Racery event. My team helped raise $981.92 for Orange Sky Australia. Orange Sky Australia helps provide a platform for every day Australians to connect through a regular laundry and shower service. The focus is on creating a safe, positive and supportive environment for people who are too often ignored or who feel disconnected from the community. Their volunteers are not social workers or experts on homelessness - they are empathetic listeners and great conversationalists. My team was phenomenal and persevered through some hard things. Not including all the races I participated in for the running clubs under the Random Tuesday Inc. umbrella, my final race of the year was Disney’s Fall Feast 5K which has become one of my favorite races. 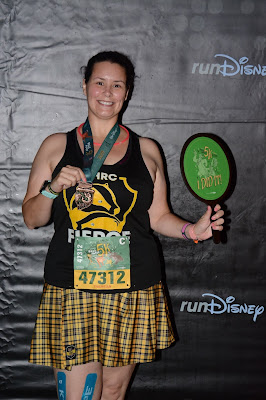 So in 2019, I completed a total of 6 live races including my 2nd 10K. Looking forward to 2020, I will be doing at least one race for each Disney race weekend starting with the 5K during the Marathon weekend in January. I am planning on completing my 3rd 10K, but hope to add at least one more to the calendar. I am also really looking forward to all of the races from my virtual running clubs and learning and learning about some awesome charities. This year has proven yet again how blessed I am to have such amazing parents and friends. There is an old African proverb that says if you want to go fast to go alone and if you want to go far to go with friends. My experience this year has taught me that you can definitely go far with friends, but you can also go fast with their constant support and encouragement.