Running Through It:  Rhonda and Parkinson's Disease 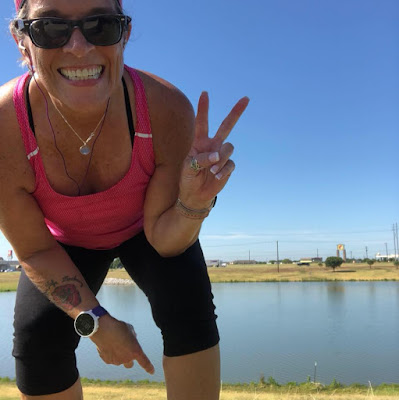 Story courtesy of AnotherMotherRunner.com   Run Though It

[Today brings us back to the Running Through It series; Tish profiles Rhonda Foulds, a #motherrunner who is Running Through Parkinson's Disease. She taken her weight—as well as her disease—under control and recently set an ambitious goal to qualify for Boston.]]
Rhonda Foulds was a 35-year-old mother of three young boys training for her first marathon in 1999 when she noticed her right pinkie was shaking badly, uncontrollably. Huh, that’s weird.
Was it nerve damage? Maybe overtraining, as she’d been adding extra miles to her normal routine. Finally her husband talked her into going to her doctor.
“The doctor noticed things I had not, like my right arm wasn’t swinging properly,” Foulds says today. “He said, ‘I think you have Parkinson’s.’”
No way, she thought then.
And says today: “Parkinson’s wasn’t new to me; my dad and an uncle had it. But I was only 35—I didn’t know people that young could have Parkinson’s.”
(Science sidebar: Parkinson’s disease is a neurodegenerative disorder that affects dopamine-producing neurons in a specific part of the brain, according to The Parkinson’s Foundation. Symptoms include tremors and balance problems. It progresses slowly; there is no cure. Michael J. Fox was 29 when he was diagnosed with Parkinson’s in 1991, and 36 when he disclosed it to the public. His foundation has raised tons of money for and awareness about the disease.)
The next five years were rough: She didn’t run that marathon; she quit exercising and gained 100 pounds. Though she still worked at Wells Fargo Bank, her physical and mental health declined precipitously.
“I had depression and anxiety,” Foulds says. “I didn’t do anything to make myself feel better.”
By the time she underwent an experimental surgery in 2004, she relied on more than 25 meds and an electric wheelchair because her legs were so shaky, she was afraid she’d fall. “I could walk,” she says. “But I was just so exhausted.”
In a surgery called deep-brain stimulation, doctors implanted electrodes in her brain and connected them to a stimulator placed in her chest. She relies on it to this day.
Returning to her previous fitness was a slow process. She began walking and riding a recumbent bike around her neighborhood in Justin, Texas. Then she read that to ease the symptoms of Parkinson’s, you have to work up a sweat, and casual walking wasn’t going to do it. So she went to the local park and ran a few steps. 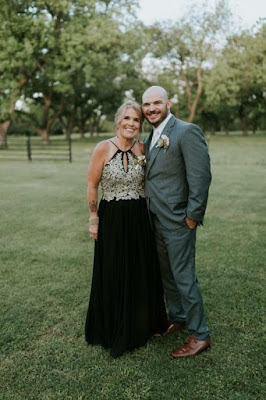 Rhonda with middle son Zach, a former Marine, who encouraged his mom to return to  running. (PS Love the runner tan lines!)

It made me feel so much better,” Foulds says. “Oh, my god! This is it! This is the secret!”
Even just a few steps did the trick. “I don’t know if it was adrenaline or endorphins or a runner’s high,” she says, “but a light went off in my brain. It literally woke me up.”
(Full-disclosure sidebar: I had the honor and the privilege of meeting Rhonda Foulds in person when she was the Reader’s Choice Winner of the 2016 Runner’s World Cover Search, which I helped judge and where I then worked.)
Rhonda discovered the motivation of goals: first a 5K, then a marathon, then the 50 States Marathon Club.
By 2016, Rhonda Foulds had run 44 marathons—including the Dallas White Rock Marathon she didn’t get to do in 1999 when she was diagnosed. She had lost 100 pounds (though she’d gained back 40.) Even better: running had eased her symptoms so successfully, she was off ALL her meds!
“Motion is lotion,” she told me back then. 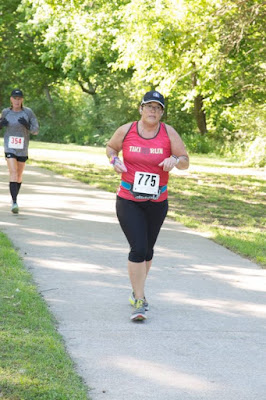 Rhonda at the 2017 Hachie marathon, in Waxahachie, Texas

Rhonda Foulds, now 55, posts avidly about her journey. She’s up to 80 marathons, as well as one 50-miler and several 50Ks. Her three sons are grown and served in the Army, Navy, and Marine Corps. She has run the Boston Marathon five times, qualifying in the mobility-impaired division (which requires a 6-hour marathon finish).
Her Facebook page caught my eye recently because of two new goals: To qualify for Boston in her age group (which requires a 4:10 marathon) and to get down to her pre-baby weight of 138.
Quite honestly—and yes, I know this is shallow—her photos caught my eye because, well, SHE LOOKS FANTASTIC! 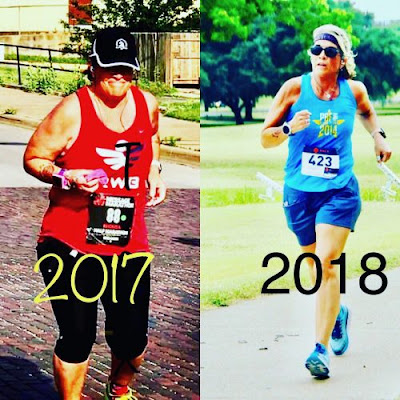 “I decided in December that I was sick of being ‘fat,’” she says. “I was going to try to get the weight off not to look better but to feel better.”
In six months she’s lost 50 pounds. Applause!
But how? “Mainly keto,” she says. “I cut out sugar, most carbs, and all processed food. I eat a lot of chicken, avocado, and coconut oil.”
No sugar? asked the cappuccino-chocolate-chip ice-cream-aholic. Isn’t that … hard?
“I have been a sugar addict my whole life,” she says. “It was incredibly hard the first three weeks, and I wanted to give up. But I felt so much better so quickly, and after about a month I thought, ‘I don’t crave it anymore.’ Once I had fat in my diet, I didn’t crave sugar.”
(The Michael J. Fox Foundation cites anecdotal evidence of the ketogenic diet’s effectiveness with Parkinson’s; if you are considering a keto diet for any reason, please consult your doctor and a nutritionist.)
Changing her nutrition allowed her to quit taking two drugs she’d come to rely on. “I was starting to have a weak and jittery voice,” she says. “It's given me more clarity. I don’t have the fogginess I had. I don’t know for sure if it was the diet, but I can see the difference.”
Her neurosurgeon checks her blood every month, and has Foulds take her blood pressure every day. “All good,” she says.
“Because I ran so many miles for so many years, I thought I could eat what I wanted,” Foulds says. “I was able to run long distances, but I didn’t necessarily have a healthy body.”
“You can’t outrun your fork.”
Not that it’s all been flowers and sunshine. She bonked pretty hard in a marathon in April. “I was delirious,” she says. “I haven’t figured out how to fuel; I have to have some carbs to run races.”
And she’s modified her 50 States Marathon Club goal to 50 races of any distance in each state.
For the summer months, she’s sticking with shorter races. In October, she’ll run Chicago Marathon for a charity, and then her goal is to go after the 4:10 marathon in Houston in January. She’ll work with a coach and a nutritionist to dial in the fueling. “If I don’t make the time goal this time, that’s okay,” she says. “It’s all about the journey.”
Last week she ran a 5K in 31 minutes, or five to eight minutes faster than usual. 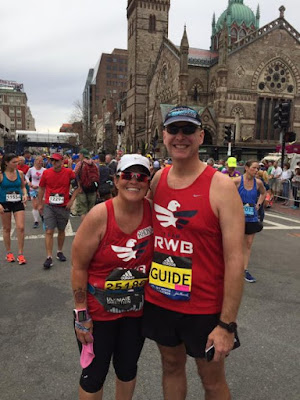 Rhonda has run Boston five times in the mobility-impaired division. She aims to qualify as an age-grouper.

“Pretty much I’ve got Parkinson’s under control,” she says. “Things change day to day so you never know, but I’ve got it pretty sewn up right now.”
Rhonda Foulds has faced some pretty significant challenges. What is her advice to other mothers facing hard times (even if they’re a different kind of difficulty)?
“It’s all in what you tell yourself,” she says. “I told myself before, ‘There’s no way I can run a marathon, especially with Parkinson’s.’ What you tell yourself becomes reality.”

True story!
-Rhonda
Posted by Walking Diva at 10:27 AM