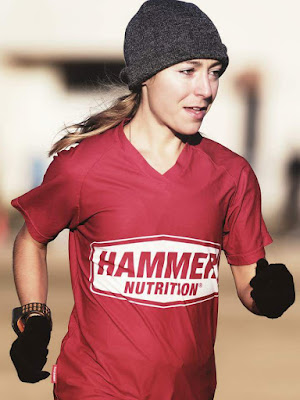 I started running marathons in 2004 after deciding not to be a nun! I had been very achievement oriented in high school (valedictorian, cheerleading captain, found a mistake on a national standardized test). When I met a friend in college who wanted to be a monk it enchanted me, it seemed to me the highest form of devotion. Halfway through college I transferred to a Catholic school and soon after joined a monastery. At first, it was everything I dreamed, but I soon felt as though I would never be able to fully express my drive to excel. That summer my aunt and uncle, marathon runners, were visiting my parents. They suggested I run a marathon, to have a new direction for my life.

I wanted to prove to my aunt and uncle that I could do it, so I followed the Hal Higdon online beginner’s guide and sixteen weeks later I crossed the finish line in just under five hours, my calves cramping and causing me to fall over! I couldn’t walk normally for three days after the race, but I was hooked. 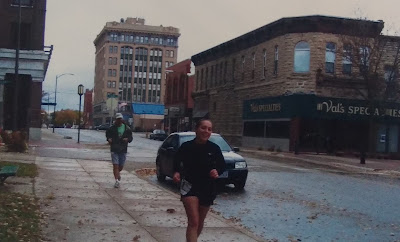 After running a few more sporadic marathons during my undergraduate degree in Art at Grinnell I decided to get a little more serious about speed and trained to qualify for the Boston Marathon, which I did just after graduating in 2007. 2007 to 2009 was a whirlwind of philosophy graduate school, teaching SAT and GRE classes for the Princeton Review in Thailand and Nashville, writing ACT questions for a book (two of which are about running! and modelling for art classes, including Nashville artist Alan LeQuire. There is a life-sized bronze statue of me in someone’s backyard in Nashville… and you can still buy a 14” bronze mini caryatid in my likeness at the LeQuire Gallery.

In 2009 I began a second undergraduate degree at Vanderbilt University, where I completed a double major in mathematics and computer science in three years, interning at Harvard, MIT, and NASA during my summers. My running time was limited but I would take books to the treadmill to walk and made flashcards to take with me on my runs and hikes. Looking for a new running challenge, I completed my first ultra, a 50k in Nashville in 2010. In 2012 I began a graduate degree in computer science at UC San Diego where I joined the graduate student running club and the West Coast Road Runners. I wanted a new goal so decided to train for a 50 mile ultramarathon, and recruited a friend to train with me. In 2014 I completed my first 50 mile race. Soon after my training partner and I joined with other San Diego runners to form a dedicated trail and ultra running group - the Trail Crashers. We trained together for our first 100 mile race in 2015 - which was to be the San Diego 100, although I got a little excited and ran two other 100 mile races first… The longer the distance the better I seemed to do. I won my first race in the summer of 2015, Merrill’s Mile, a 24 hour race in Georgia that was the fourth of six 100+ mile races I completed in eight weeks. 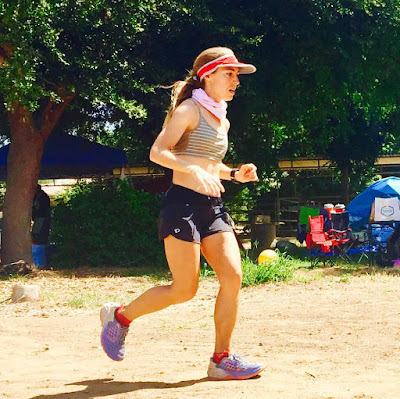 In 2016 I set a new female course record at the Jackpot Ultra Running Festival 100 mile race in 17:24:58. According to Ultrarunning Magazine this was the 11th fastest female 100 mile time of the year. I also ran the 34th fastest female 100k and the 99th fastest female 50 mile race of the year. 2016 included four first place wins (Jackpot 100, Beyond Limits 100, Riverbank One Day 24 Hour, Orange Curtain 100k), one overall male/female win at the Beyond Limits 100, and three course records - the Jackpot 100, Riverbank One Day 24 Hour, and the Bare Burro 5k. In 2017, while waiting for a job to start, I was injured and unable to run. So I turned to walking. I would take long journey walks, 10-20 miles or more, heading out the door with a light pack and a credit card, stopping for food and water along the way. I climbed all of the local mountains and explored local trails, and streets. 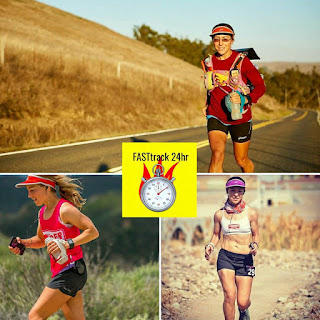 I had wanted to do something epic with the unique opportunity I had - time off waiting for my clearance and a small retainer stipend. I started researching long trails in the US and looked for one that didn’t yet have a “Fastest Known Time” (FKT). Originally I hoped to do the American Discovery Trail, which spans the entire US, starts in California, and goes right through my hometown of Muscatine, Iowa. However, I got a call that I needed to be ready for my job to start in only a couple of months. The California Coastal Trail (CCT) seemed like the perfect fit -- it was only 1,200 miles, close by, had good weather, and was always close to civilization -- not much trail experience required! Since nobody had ever recorded an FKT, all I had to do was properly document my trip, and complete it, no pressure to go faster than my body would allow. In the end, I covered nearly a marathon a day for 44.5 days, my injury healed, and I won Ultrarunning Magazine’s #4 FKT of the year for 2017. I wrote a lengthy report of the trip as part of the FKT documentation: 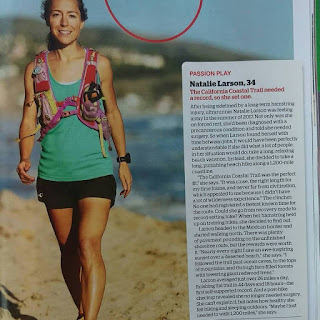 http://natalielarsoncct.blogspot.com/.  It was an amazing adventure.


2018 has been a year of training and building speed, for the first time in my running career I’ve been working with a dedicated coach. I’m looking forward to returning to racing in 2019.

Thank you to Yolanda for inviting me to write my story on this blog. Yolanda’s determination and positivity continually inspire me!
-Natalie
Posted by Yolanda Holder at 5:48 AM