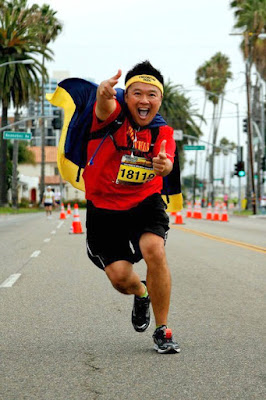 If you’ve ever run a marathon, chances are you’ve probably seen a dude with spiky hair in a cape fly by. That marathon caped crusader probably high fived you, cracked a 4th grade joke or two, and then ran off to grab a GU at the aid station. That’s Endorphin Dude, and that dude is me. I run a lot of marathons. And yes, I run in a cape and you will always see a big smile on my face. These days, I can be found on the trails, as I have crossed over into the ultra world. For those not in the know, this is distances beyond the marathon. Yeah, I get a thrill in running 50ks, 50 milers, and 100 milers, and even though I may not don the cape, I am still Endorphin Dude. Every super hero has an origin, and mine is pretty dark.

Nearly a decade ago, I was an insulin dependent couch potato. I spent my mid twenties and thirties in a cubicle slothed in front of a computer. When I got home from work, I would plop myself on the couch and watch TV while shoving my face with frozen pizzas, baloney sandwiches with extra mayo, and soda. The only exercise I got was taking my dog Chewbacca to the tree right outside my front door so that she could relieve herself, and that in itself was a laborious chore. I was always overweight, but the ten years I spent in that cubicle resulted in me ballooning up to a whopping 223 pounds. Mind you, I am only 5’6″. 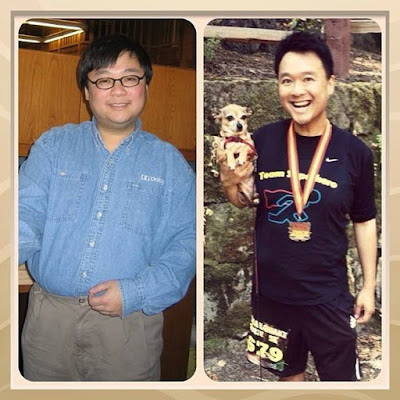 To make matters worse, that sedentary life style lead to many other health problems. I was barely thirty years old and had to take meds for type two diabetes, cholesterol, and high blood pressure. In my mind, though, it was ok. I kept telling myself, “Why do I have to exercise and lose weight? Modern medicine has made it easy for the obese American! All we have to do is take a magic pill and our cholesterol, glucose numbers, and blood pressure will be regulated! Give me another bacon sandwich!” Seriously, I believed that. My doctor flat out warned me that my glucose numbers had reached such an alarming level that I was two donuts away from getting my legs amputated. She punctuated that warning with this downer: “If you continue to live like this, you will not make it past 40.” I shrugged it off.

As each day of my mundane junk food filled life passed, I became sequestered in my shoe box studio apartment. Laziness and denial dragged me further into Jabba The Hut mode. The vicious fat cycle repeated itself every day: wake up, go to work, sit on my rear in a cube all day, go home, plop on the couch, shove lethal toxins in the form of Ho Ho’s and deep fried hot dogs smothered in Ranch and blue cheese, fall asleep, wake up, and repeat. The sweat from my pores turned into a glue like substance and I pretty much stuck to the couch. There were numerous occasions when I couldn’t move my toes, let alone get up to take Chewbacca out to pee. Let’s just say that for a while, my apartment smelled like a doggie urinal. Yes, it was that bad. 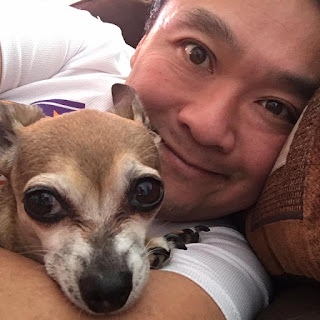 One day, the routine was broken by an unexpected event. I came home from work and collapsed on my living room floor. I thought I was having a heart attack. I felt numbness on the left side of my body and sharp pain in my chest. Chewbacca barked and ran around in circles as if she sensed she was soon going to become an orphan. I seriously thought my time was up. Fortunately, this was only a heart attack scare and not the real deal. After everything settled, I got up and took the dog for a walk. When I returned, my little dog snuggled up with me and gave me that don’t-ever-do-that-again sad puppy eyes. This was the turning point. I knew I had to make some changes in my life. I took Chewbacca for a longer walk the next day. The following day we went further. Before I knew it, my little mutt and I were pulling out multi-mile urban hikes throughout San Francisco. The weight quickly dropped and I found myself feeling better, both physically and mentally. Walking my dog became my therapy. 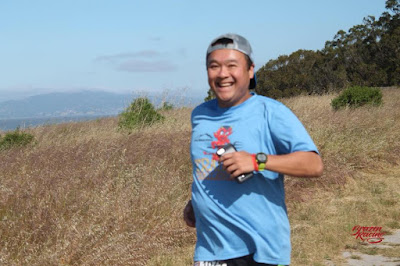 Later that summer, a friend of mine said he was going to run the San Francisco Marathon. I told him I would be at the finish line cheering him on. This was brand new to me. I seriously thought a marathon was 10 miles! I also thought a 5k was a tax form. I knew nothing about about running. In any case, when all the runners came flying through the finish chute, I felt that second hand high. I wanted that feeling of euphoria for myself. I turned to the random stranger next to me and proclaimed, “I’m going to run this marathon next year!” I needed to say it out loud so that I would be held accountable. I stayed to the end and cheered on every runner. When the last marathoner crossed that finish line, I went home and researched all that I could on training for marathon. 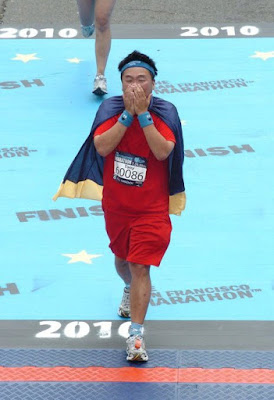 Because I am not a naturally born athlete, I had to start from scratch. I remember running that excruciatingly painful first mile. I went out way too hard. I didn’t know anything about pacing. It took me a few weeks to find my groove. I kept at it everyday and after many weeks of training, I successfully ran my first half marathon in October 2009. When I crossed that finish line, I felt like I had just won the Olympic gold medal. All my hard work was coming to fruition and it excited me even more to continue the marathon training.

Once the endorphins wore off, reality sunk in and I quickly realized that running 26.2 miles was a lot harder than the half marathon. I finally understood what runners meant by “the wall.” It frustrated me to no end that I could not go beyond 18 miles! It got to the point where I had to play mind games to get me through those tough miles. In my head, I created an alternate world where I transformed into a superhero who needed to save the world, one couch potato at a time. During my training runs, I played this video game in my head, and every time I reached another mile, I would receive an energy pellet. I rewarded myself bonus points for dodging cars, knocking out coyotes on the trail, and side swiping bikers. All of a sudden, the pain I endured from miles 15 through 22 turned into a fun little quest to get to that finish line. Endorphin Dude was born! 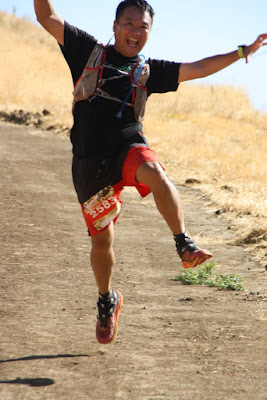 On July 25, 2010, I ran my first marathon in San Francisco. When I crossed that finish line, I saw all the blood, sweat, tears, and GU flash before my eyes. What an incredibly surreal moment, one that felt like a euphoric out of body experience. I had never ever felt runner’s high to that degree. I knew that day that I would replay that moment in my head, over and over again, for the rest of my life. I was on that runner’s high for days, and I admit, I wore that medal around my neck when I took Chewbacca for her walk. My legs, knees, and thighs may have been completely banged up, but my heart kept yearning for more.

The San Francisco Marathon was supposed to have been my one and done bucket list race, but running makes me feel like a super hero. I am Endorphin Dude!  Who would have thought that the guy who had a heart attack scare would become the Marathon Caped Crusader?  I am definitely experiencing a cardiac infarction of the euphoric kind these days. 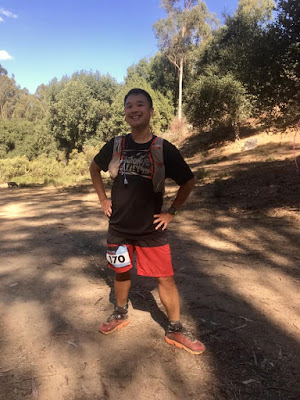 Since that life changing day back in 2009, I have run over 165 marathon and ultras, with seven of them being 100 mile endurance races. These days I run more trail ultras than road marathons, and I opt not to wear the cape. The reason is simple: I don't want it to get caught on a branch! Make no mistake though, I will never forget my humble beginnings. Over the past decade, I have experienced euphoric highs and heart breaking lows, but at the end of the day, I am still doing this. I have found peace in running. I truly appreciate every aspect of life now. I really like the person I have become. A healthy dude is a happy dude. Life is good!