2017 Inspiring People of the Year Ed "The Jester" Ettinghausen 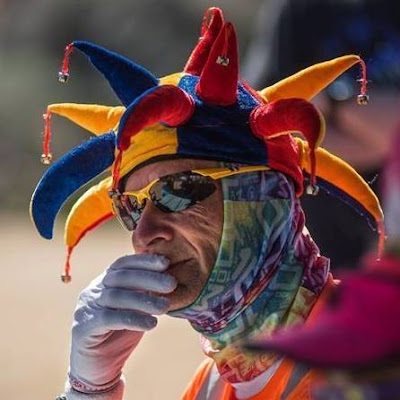 If my mind can conceive it, and my heart can believe it - then I can achieve it.”
― Muhammad Ali-

DREAM EXTREME . . .
and dare to EXCEL beyond your grandest imagination!What could you accomplish in your life if you could not lose and could not fail?

Stick around with me ‘til the end and I’ll share with you the secret I’ve learned about illuminating losing and failing, and then eliminating losing and failing from your life.
My name is EDWIN Ettinghausen. I’m a husband of 35 years – all 35 years to the same saintly woman – Martha Ettinghausen. I’m a father of four pretty cool adult children, and one amazing grand-daughter. As Zig Ziglar was fond of saying, “If I had known how amazing grandkids were going to be, I would have been nicer to their parents.” Another very observant person once said, “grand kids are the reward parents get . . . for not killing their kids!”
Outside of my family life, I own a small business, am a running coach, and a motivational speaker. And I run . . . just a little bit. I’m very proud and humbled to hold over 20 world records in races of 100 miles or longer. 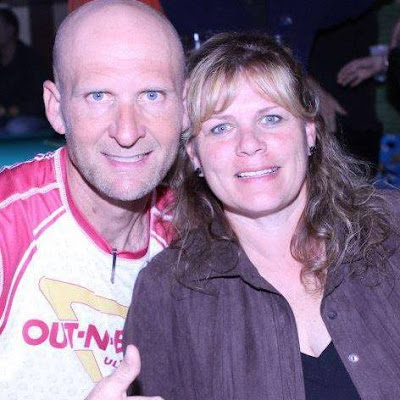 Here’s my story.
When I was eight months old, I was removed from my mother’s care, due to neglect, and was placed into foster care. I was in foster care until I was 18. Definitely not the ideal way to grow up, but you learn to deal with the hand that life deals you. That’s what makes you stronger.

When I was 17 years old, I trained for a marathon by reading running magazines and books. In my senior year of high school (1980), I completed my first 26.2 mile marathon in just over three hours. I was hooked!
In the next nine months, I completed four more marathons, with a PR of 3:01:18 – the Napa Valley Marathon in March, 1981, at the age of 18.
For the next phase of my life, I focused on the priorities of any normal 18 year old - college, marriage, career, kids, then the white picket fence, etc. There was no time in my life for running, and certainly no time for running marathons.
A few years after my third child was born, after a 13-year hiatus, I decided it was time to dust off the ol’ running shoes and revisit my long dormant passion for running marathons. By this time, I was 31. I signed up for the 1994 Los Angeles Marathon and proceeded to train.
And man, did I train! It was grueling!
I showed up race day fully prepared to run 26.2 miles. I was ready to outrun everyone on the course that day. My marathon prep consisted of a few short runs and one “long run”. The total training miles couldn’t have been more than 20 or 25 miles. Tops!
It was a great race, from the start through mile one . . .
And it was not so great of a race from mile one through mile two . . .
And by mile three, my knees were killing me!
My pace went from a fast run . . . to a slow jog . . . to a painful walk. Before reaching mile four, I turned around, did the walk of shame back to my car - through the oncoming stampede of nearly 20,000 marathon runners and walkers, and drove home.
For the second time in my very short running career, I retired from running marathons. But this time for good. I was certain that my knees were ruined, at the ripe old age of 31 . . .
Fast forward 14 years to 2008. That year marked the culmination of some severe financial losses, which caused my bi-polar condition to tilt to the dark side. In a desperate attempt to claw my way out of that black hole, I started walking on a daily basis. Then I started to run. A little bit at first, then a little bit more, until before long, I was actually able to string a few miles together – pain free.
In the Spring of 2009, almost 28 years to the day after the last time I had ran across my last marathon finish line, I completed the Pasadena Marathon, in under four hours. A month later, I did another one, and then another.
Two weeks later, I discovered the 100-mile race. I was once again bit by the running bug, and morphed into an ultra-running fool! 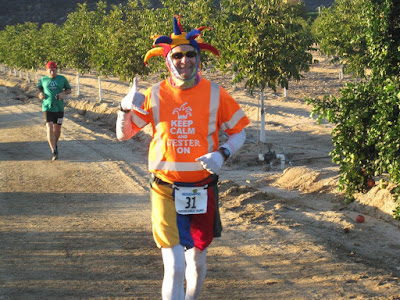 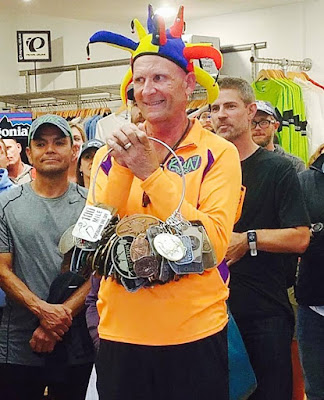 Now, I promised I would share with you the secrets I’ve learned about eliminating losing and failing from your life.
Are you ready?
It’s a two-step process.
Here’s step 1:
DIE!
Okay I lied!
The only way to truly eliminate losing and failing from your life is to have no life. Living is all about taking chances every day – chances to lose, and chances to fail.
I’ve coached enough people to know that champions take a chance on losing and failing, multiple times, every single day. As long as you learn something valuable from each and every lose and failure, you’re making progress, and with that mindset, you can learn to look forward to the important lessons that you can only acquire through losses and failures.
Actually, there is another meaning to DIE. You don’t have to “die” to start to eliminate losing and failing from your life, but you do need to D.I.E. -
find that one thing and -
Do
It
Everyday
Whatever your EXTREME DREAM is – running/walking a marathon, writing a book, learning a new language or how to play a musical instrument - DO IT EVERYDAY!
In the last nearly nine years, I’ve learned a very valuable lesson about chasing my EXTREME DREAM. You have to be willing to lose, and to fail, in order to win and succeed. That is the only true way you can grow and advance to the next level.
I’ve learned with running, when I DIE - Do It Everyday – I’ve gotten stronger, faster, and better over time. 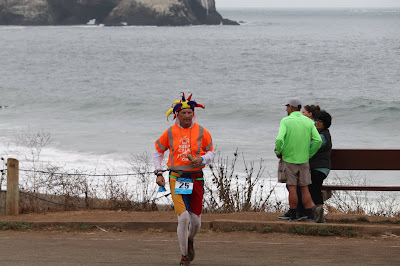 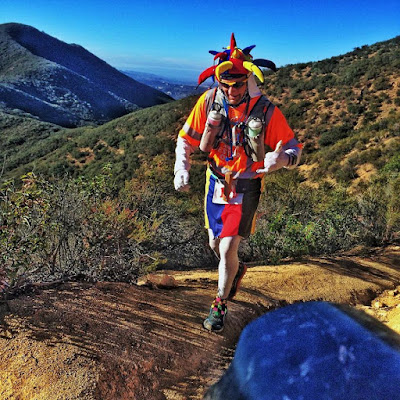 he finish rate for a 100-mile race is typically 20-80%. The inverse of that is that there is a 20-80% failure rate. Nearly 100% of my running friends that run 100-mile races have failed to finish at least once, and most of them have failed many times. Personally, I’ve failed to finish a 100-mile race on eight different occasions. We call it a DNF – Did Not Finish. And yet, we don’t consider ourselves failures, just because we didn’t finish something that less than one in 10,000 people will ever even attempt. We know that our biggest weaknesses are shown to us through the gift of a DNF.
Not finishing a race does not make one a failure. Not winning a race does not make one a loser. Losing or failing is not a place in a race, it is a state of mind.
Losing doesn’t define winners. Losing refines winners!
By changing your mindset, you can actually look forward to the rewarding lessons that can be learned from losing or failing.
Would you believe me if I told you that I can’t wait to lose every time I show up at a 100-mile race?
t’s true!
Okay, I passionately enjoy winning much more than losing, but let me show you what I mean.
Since I started focusing on this two-step process – SHOW UP and D.I.E. - here’s what happens. With few exceptions, I run (DIE) every day - Do It Everyday. Please don’t misinterpret that, for me running is not dying, it’s living. I have to run every day for my mental health. So for me, actually to NOT run every day is to die.
And I SHOW UP to 100-mile races more often than anyone else has ever done in history. Because of that, I’m only 11 wins away from achieving the status of – WINNINGEST 100-MILE RUNNER IN THE WORLD, which I should achieve by this time next year.
Now, every time I SHOW UP to a race and don’t win, two things happen.
One – As long as I finish, even dead last, I add one more race to the world record for most 100-mile race finishes. 153 and counting. I’ve been able to break that record 12 times so far. Breaking a world record every time I cross the 100-mile finish line is a pretty amazing feeling, let me tell you.
Two – As long as I finish, I add one more race to my goal of being crowned –  LOOSINGEST 100-MILE RUNNER IN THE WORLD!
I only have to lose 25 more 100-mile races to become the LOOSINGEST 100-MILE RUNNER IN THE WORLD!
As long as I keep running, win or lose, I will eventually complete another ground-breaking world record.
So, to conclude. Whether you want to break 100-mile world records, run/walk your first marathon, simply walk around the block without collapsing, or accomplish whatever your EXTREME DREAM is - here's my advice to you. 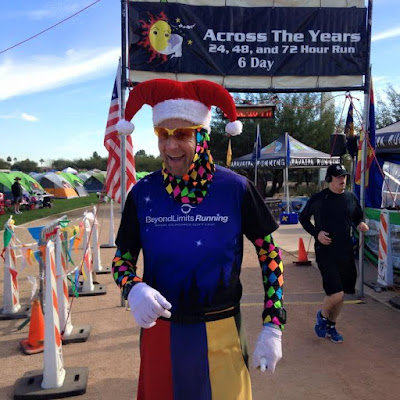 1. REALize your UP – Ultimate Potential. Find and follow your purposeful passion!
2. Have a mentor and/or a plan of action to help you accomplish your specific goal.
3. JUST SHOW UP!
4. Focus on your single most import thing and DIE for it – Do It Everyday!
5. Live life to the fullest in each and every moment.
6. Risk losing and failing every day.
7. Look for the GO – Growth Opportunity. Train your brain to look forward to the important positive lessons from each lose and failure.
8. Be like Pollyanna – look for the good in every person and every situation you encounter.
9. Associate with like-minded optimistic people who have already accomplished, or are progressively accomplishing what you want to accomplish.
10. Help uplift and encourage those around you so that they too can achieve their own EXTREME DREAM!
Extreme Dreamers WIN!
(My parents named me E.D.WIN, so it’s my birthright.)
Dream BIG
and dare to fail.
DREAM EXTREME . . .
and dare to EXCEL beyond your grandest imagination! 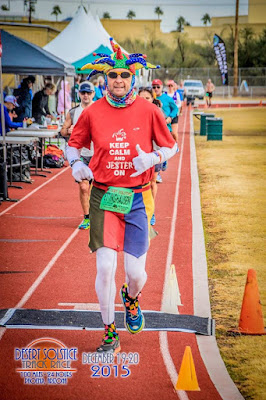 REALize Your UP – Ultimate Potential – Each and Every Day!
Dream B I G !
Believe B I G G E R !!
Passionately Pursue Your I’mPOSSIBLE!!!