Running Brings Joy Into My Life 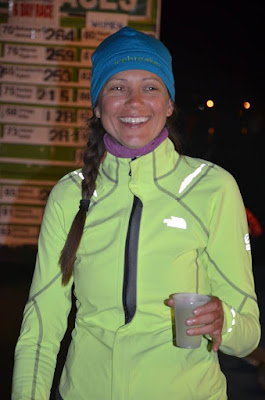 When I was around twelve years old, everyone from my school class had to run 1500 meters and I remember thinking 'what a long distance!' Then when I was sixteen I started to meditate and my life opened up to new ideas and goals. I decided to run my first marathon when I was seventeen. It was Rome marathon in 1995 in Italy. The inspiration came from my spiritual teacher Sri Chinmoy, who loved running.

I did not have much time to train, so the longest distance I ran as a training was around 10km. I did not have proper running shoes, I did not have extra money for real running shoes. I was born and brought up in Slovakia and there was not much choice of running shoes at that time anyway! So my first marathon was painful, challenging and finally full of joy when I finished! I wanted to stop twice during the race, but every time I stopped and looked around, everyone was running ahead. Thousands and thousands of people. That kept me going. After I finished I remember sitting on a bus going back home and having intense knee pain! But also sense of satisfaction of finishing my first marathon. Few years before that I never even dreamed of running a marathon! I have realized that anyone can run a marathon if one has inspiration and a bit of determination. 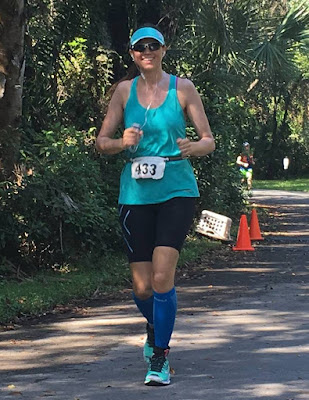 When I was twenty I moved to Ottawa in Canada. I had run some more marathons in Canada and US and really enjoyed it. Unfortunately later on I ended up with adrenal burn out from working too much and doing too many things and not taking enough rest. It took me some years to recover and I learned from this experience that our body does have limits. It is nice to be dynamic and active, but we also need to take rest to recover.

When I was around thirty- three , I really got interested in weightlifting. I would lift weights every morning for about an hour throughout a week and then on Saturday I remember spending sometimes 3 hours on doing weights! It gave me feeling of confidence, strength and it just felt so good! I continued with weightlifting for about a year and then I slowly also started to get back to more running. I ran few half marathons and then marathons. It was nice to be back on track again. 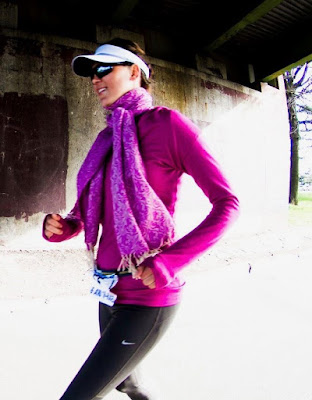 Around that time I remember hearing about multi day races and thinking and saying “I will never run those long races! It is not for me, must be so painful!” Then I went to see the finish of a ten day race in New York and I could see that the runners were in pain but they were so happy and radiant! And that's when I decided I wanted to run this race one day and experience what they have experienced! 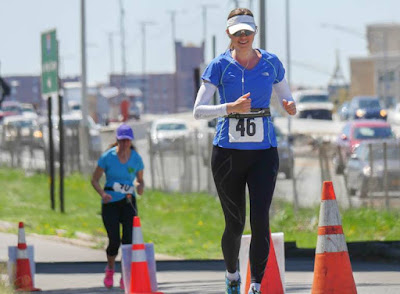 And so I started to run a bit more distance and I got interested in nutrition. I did a bit of research about running shoes and running gear and tent and socks and I asked lots of questions from people who had ran this race. And I decided to run my first multi day ten day race in April, 2015. Training for the race was not easy. I was living in Ottawa at that time and the winters there are so cold! I would run for many hours sometimes in minus ten celsius. On the first of January I decided to run a marathon to celebrate a New Year and do some good training. After running around 28km it was all dark outside and it was hard to find a good place that felt safe to run alone. And so as I ended up running some distance by the road on a grass in dark and cold and unfortunate thing happened! I twisted my ankle! Less then four months before the race! I could walk ok the next day but my ankle swollen up and it was painful a bit when I tried to run a week later. But I could run and so I decided to continue with my training. Month later my ankle would still swell up and I had pain. It was getting so close to the race, I got worried. And so I took 5 weeks brake from running. A bit scary. I was certainly upset.

Three weeks before the start of the race I started to run again and still had some pain and swelling, but it did seemed to be improved. And so I decided to run the race anyway and stop if I had to. Surprisingly during the race the ankle did not give me much trouble. But I had my first experience with sheen-spleens and ended up walking and trying to run through the pain for few days of the race. On day six I finally felt I could run normally and I ended up finishing 3 rd with 530 miles. During the race I experienced all sorts of emotions from despair and disappointment to happiness and feeling of upliftment. On day three I said I will never do that race again and then when the race was finished, I was already looking forward to the next one! 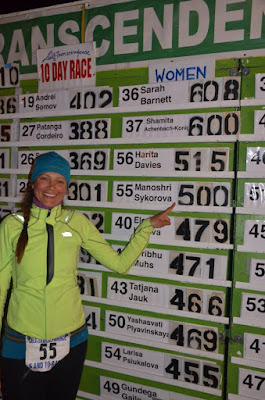 My recovery after the race was quite fast and I was happy to be running again! I wanted to train more and improve for the next year. I ran 6 hour race 5 weeks later and did 60.30 km. Then a month later I went to see the 3100 mile race in New York and I ended up running 3 marathons in 3 days just for fun, next to the course of the race. And then five days later I did a 50km hilly off road race in Gautineau park close to Ottawa. Quite a lot of running in such a short time. During the race I started to get a sharp pain in my foot and somehow I did finish the race, but with tears in my eyes. I had no idea what the pain was from. It took me couple of months to figure out that I had a stress fracture and I need to take complete rest from running. That was so hard! I could not run for about 5 months total. How hard that was not to run at all for that many months! Eventually I started to train again sometimes in January for my second ten-day race. The pain was still there, but it eventually got better and better. (Surprisingly even now, three years later, I still get a bit of pain in that area when I am increasing my running distance. There is some kind of scar that develops and I am not sure if it ever goes away. But luckily it does not stand in a way of my running). 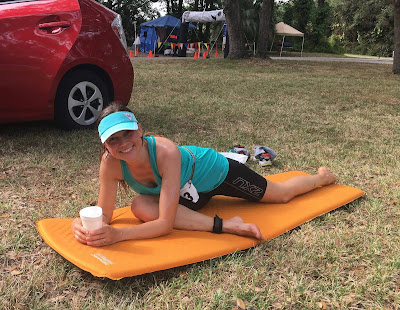 My second ten day race was a completely new set of experiences. The first six days I really pushed myself and ran 405 miles with a minimum of sleep. But then my body could not keep up with all of it and my muscles actually started to malfunction and I could not lift normally one of my legs! I had no idea what to do! I took a break for many hours and had some extra sleep at night and talked to few people trying to find a solution. It seemed that having more regular and longer rest was the only solution. Otherwise my muscles started to malfunction again. I could not wait for the end of the race. I finished 3rd again, this time with 609 miles. I improved 79 miles from the year before. I was very happy! 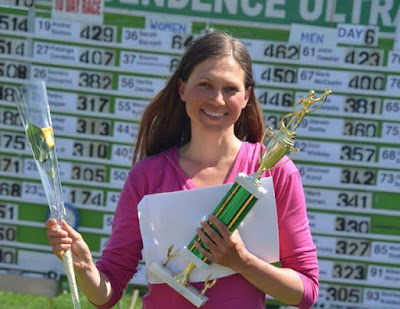 In 2016 I got married to my husband Galya who is a three time finisher of the 3100 mile race and has the third fastest finish in the history of the race after Ashprihana and Madhupran. In 2015 he ran 3100 miles in 42 days and 17 hours which is such an amazing finish! He also won many 24-hour races and 6-day races. In November 2016, we participated in Icarus 6-day race in Florida. Galya ran the 48-hour race and also helped me during the 6-day race. I believe that because of his help and encouragement I ended up winning the race overall, with 432 miles and setting a course record, averaging 72 miles a day. 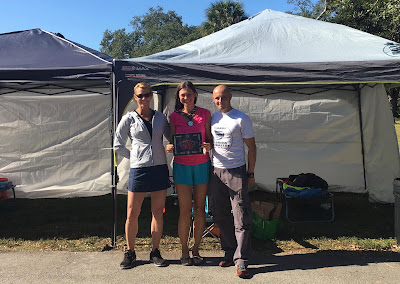 I love the multi day races for the sense of satisfaction and happiness that they bring. I also find that when I am running that kind of distance, my mind gets quieter and I get into a kind of zone where things just flow and happen for you and with you. I do love that feeling and I always wish it would last longer. I also feel that each race and all days of training for it make you stronger and more experienced for the next year race. I am very grateful to all the people who inspired me over the years and also to my spiritual teacher who got me inspired in the first place to start running marathons and then ultra races.

Last year me and Galya we moved to beautiful Vancouver Island in British Columbia. We continue running, hiking, cross country skying and plan to do some kayaking next year. And we are looking forward to some other future races.

I believe that anyone can do marathons or ten day races if one is inspired and has determination. It is only the mind that is limiting us and if we go beyond our doubts and fears, amazing things can happen in our lives. We just have to believe that we can! 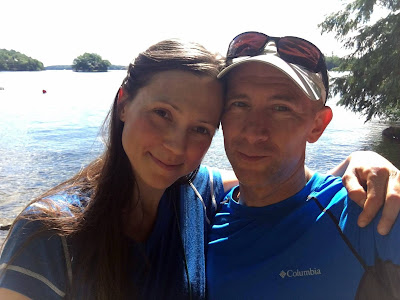 I am so grateful that I got to know Yolanda. I am truly amazed she finished her first 3100 mile race power walking! She has such determination and will power! Plus she finished so many marathons and other races over the years. Truly amazing accomplishment! Thank you for choosing me as one of the Inspiration people of the year. I am truly honored.
-Manoshri-