Over Seventy, Loves Running and Life 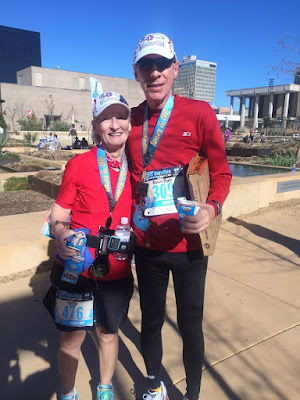 On Thursday, May 2, 2013, I got an email from Jim Simpson asking me if we could run together in the Potomac River Run the following Sunday. I had known Jim for several years and we had talked about various aspects of several marathons, so I thought he wanted to discuss something of that nature. I still didn’t suspect anything when Frank approached me before the start to tell me that Jim said to tell me that he wanted to run with me. Not even when another friend repeated the same thing.  It wasn’t until later that I learned his true motive. We had been running together for a couple of miles when he reached for my hand, saying, “My hand’s cold. I need you to warm it up.” As we approached an aid station ahead, one of the volunteers said to the other, “Look how cute. They’re holding hands.”   Only then did I realize Jim was flirting with me. He later told me that he’d had his eye on me for more than three years, before he worked up to courage to make a move. Let me explain why. 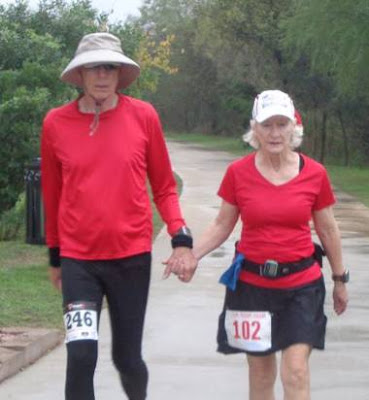 Jim runs a lot of marathons. He was the first American to reach a lifetime total of 1000 marathons or longer, and is on his way to 2000. He has over 1600 as I write this. He ran 205 in 2013 alone. The way he does this is by spending most of the year living in his pickup truck and camper, traveling from marathon to marathon. He thought I (or any woman) would not tolerate him running so much and would want to settle down in one place. Hence, he hesitated to initiate a relationship. 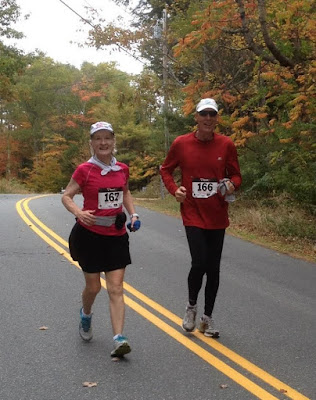 I, on the other hand, expected to be alone for the rest of my life because I thought no one would tolerate my normal schedule. When I am at home, I am fully absorbed in my tutoring business. But I am away many weekends for the same reason as Jim—to run marathons. While I don’t do nearly as many as Jim, I run more than the average runner. I managed to run 102 in 2014, becoming the fifth woman in the world to run 100 or more in a calendar year. My total is a mere 345, not in Jim’s league, but still respectable. 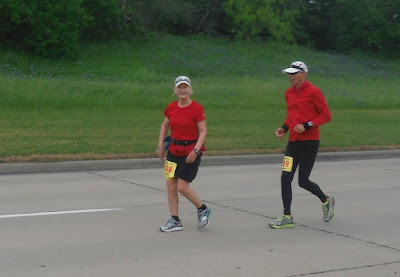 Jim and I are both competitors. Not so much with the clock, or even with other runners. But we set goals. We enjoy great fulfillment when we are able to complete a goal. Each of us competed in other ways in our earlier years, and now we find our challenges in running marathons. Running not only brings both of us enormous satisfaction and many wonderful friends, but it also brought us together. 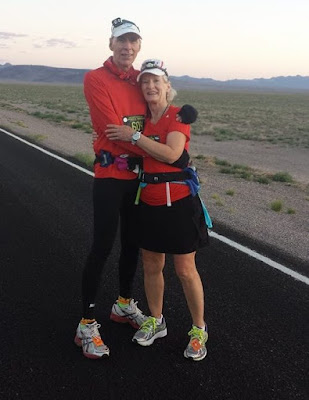 And now I accompany Jim in the camper for much of the year, as we continue on our quest to meet personal goals. You’ll see us in our red shirts, usually in the back of the pack and often holding hands. 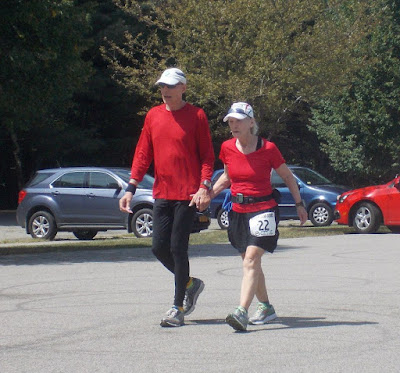 -Bettie Wailes-
Posted by Walking Diva at 6:18 AM